The Bold and the Beautiful Spoilers: Xander Visits Liam and Hope To Reveal Baby Swap

BY Heather Hughes on June 1, 2019 | Comments: one comment
Related : Soap Opera, Spoiler, Television, The Bold and the Beautiful 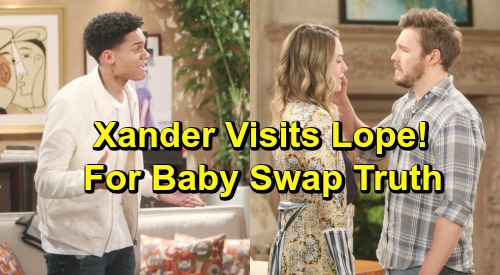 The Bold and the Beautiful (B&B) spoilers tease that Xander Avant (Adain Bradley) will be disgusted with the secret crew. He’ll make it clear that Zoe Buckingham (Kiara Barnes) and Florence “Flo” Fulton’s (Katrina Bowden) silence is inexcusable. They’ve watched Hope Spencer (Annika Noelle) and Liam Spencer (Scott Clifton) suffer through a great loss all while sitting on such huge information.

During the week of June 3-7, B&B fans will see a battle over the truth. Zoe will remain adamant that it can’t come out, but Xander will insist that it must. He’ll refuse to listen to Zoe’s complaints and desperate pleas. Xander will think the only thing that matters is easing “Lope’s” pain and reuniting them with their little girl.

Flo will eventually be called in for backup. She’ll get that this is a messed-up situation, but she won’t want Xander blowing up so many lives – including her own. Flo should be most concerned about messing up her romance with Wyatt Spencer (Darin Brooks). She never stopped loving him and they’re finally getting back on track again after all these years. Xander could wipe out Flo’s happiness in a flash.

Of course, Flo will have moments where she wonders if Xander’s right. She’ll contemplate just coming clean and stopping this nightmare. Hope and Liam’s impending annulment will weight heavily on Flo’s heart, but her selfish side should win out in the end. Flo’s got too much to lose now, so she’ll likely stand with Zoe throughout most of the drama.

It’ll be a weeklong war that takes them back and forth, but Xander will finally decide he’s had enough. He’ll want Flo and Zoe to understands what’s going to happen here. The Bold and the Beautiful spoilers say Xander will make a powerful speech about doing what’s right. Once he’s done, he’ll deliver an ultimatum that fills Zoe and Flo with fear.

It looks like Xander will lay down the law and contend that if they don’t confess to Hope, he’ll do it for them. Xander might suggest that if Zoe and Flo come clean themselves, at least they’ll be able to show they had a change of heart in the end. It’d be better for them to tell their side of the story and plead for forgiveness. If Xander shares that Beth is alive, it could make things even worse.

However, B&B spoilers say Flo and Zoe won’t do what they’re told. That’ll lead Xander to demand a private conversation with Hope and Liam just before their annulment papers are signed. He’ll obviously back out of admitting the truth, so he’ll have to think fast and come up with an excuse for his strange behavior.