The Bold and the Beautiful Spoilers: 2 Weeks Ahead – Shauna Freaks Over Flo’s Part in Baby Beth Swap Crime

BY Heather Hughes on April 9, 2019 | Comments: one comment
Related : Soap Opera, Spoiler, Television, The Bold and the Beautiful 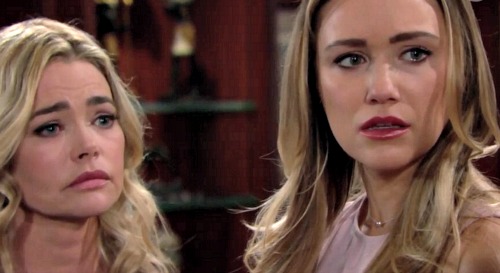 The Bold and the Beautiful (B&B) spoilers tease that Florence “Flo” Fulton (Katrina Bowden) will struggle to keep her big secret. It’s one thing to hide the truth from Hope Spencer (Annika Noelle), Steffy Forrester (Jacqueline MacInnes Wood) and other people she doesn’t know very well. It’s quite another to hide the truth from her own mother, Shauna Fulton (Denise Richards).

B&B fans can expect Shauna to be taken aback by the news of Flo’s birth mom status. She won’t understand it at all, especially since the timing may not fit. Shauna might’ve seen Flo during this so-called pregnancy. She obviously wouldn’t have noticed a baby bump, so that could be a major red flag.

Shauna will also wonder why Flo wouldn’t have mentioned something so huge to her. She’d like to think her daughter would come to her about a surprise pregnancy, so she’ll definitely launch an interrogation. Shauna will suspect that Flo’s twisting the facts, and she’ll want to know why.

Flo is dying to get this baby swap off her chest anyway. It shouldn’t too hard for Shauna to break her. During the week of April 15-19, The Bold and the Beautiful spoilers say Shauna will face plenty of shockers. When she finds out the truth behind “Phoebe Forrester” (Isabella de Armas and Redford Prindiville), Shauna will be deeply disturbed over what Flo’s gotten herself into.

As a mom, Shauna will understand how painful this must be for Hope. She’ll inevitably scold Flo for taking part in something so ruthless. At the same time, Shauna will surely see Flo’s remorse and want to protect her. That’s what soap moms do, even if others pay the price for it!

The Bold and the Beautiful spoilers say Flo’s father revelation will also be a game-changer. She’s Storm Logan’s (William deVry) daughter, so she’s part of the family she’s hurting. As the guilt piles up, Shauna may face some difficulties with Flo. She’ll really have to work at it if she wants to keep her daughter’s mouth shut.

It sounds like some fantastic episodes are coming up. We’ll give you updates as other B&B details emerge. Stay tuned to the CBS soap and don’t forget to check CDL often for the latest Bold and the Beautiful spoilers, updates, and news.