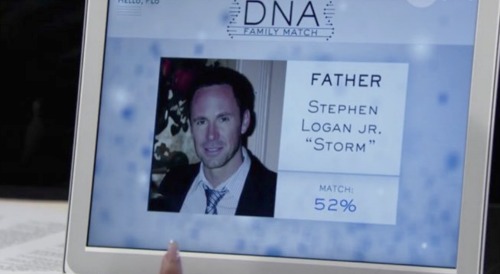 The Bold and the Beautiful (B&B) spoilers tease that the mystery of Florence “Flo” Fulton’s (Katrina Bowden) father will unravel. Shauna Fulton (Denise Richards) can’t say for sure that Bill Spencer (Don Diamont) is Flo’s dad, but she’s feeling confident at the moment. What she doesn’t know is that Flo’s already searching for a DNA match. Flo will indeed score one on April 11, and it won’t be “Dollar Bill.”

B&B fans can expect some shock waves when Flo is given Logan status. It turns out her bio dad is Stephen Logan, Jr. – or “Storm” as he was known to viewers. Sadly, Storm took his own life so Katie Forrester (Heather Tom) could have his heart, which means he won’t be around to bond with Flo.

However, Flo can still learn about Storm through his family and friends in Los Angeles. She’ll become part of the Logan clan, which should make her fake birth mom situation even more stressful. Hope Spencer (Annika Noelle) will become obsessed with getting to know her, which will make Flo increasingly nervous. The Bold and the Beautiful spoilers say Flo’s in way over her head here.

On the bright side, Flo isn’t related to Wyatt Spencer (Darin Brooks). It’s good to hear his high school sweetheart isn’t his sister. The updates should bring a sigh of relief for Flo, Wyatt, Quinn Forrester (Rena Sofer) and especially Shauna. She genuinely believed Bill was Flo’s bio dad, which is why she kept her daughter out of the loop all these years.

Shauna will admit she actually cared for Storm and thinks back on their time together fondly. She’ll add that she heard about Storm’s death and was deeply saddened. Of course, the Logans will be eager to welcome Flo as a new family member and a surprise connection to Storm. They’ll feel like she’s a blessing that’s allowing Storm’s memory to live on.

The Bold and the Beautiful spoilers say Flo will soon be under more pressure than ever. She’ll feel like the walls are closing in since she’s keeping this dark baby swap secret. Adding another complication just isn’t what Flo needed right now!

What do you think about Storm being Flo’s father? How will she handle this bombshell when she’s already got so much on her plate? We’ll keep you posted as other B&B news comes in. Stay tuned to the CBS soap and don’t forget to check CDL often for the latest Bold and the Beautiful spoilers, updates and news.