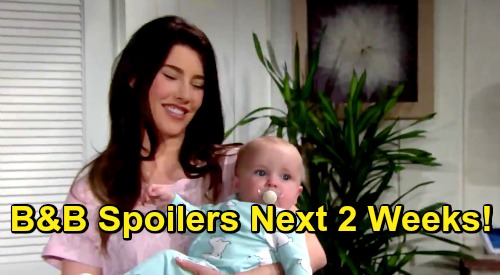 The Bold and the Beautiful (B&B) spoilers for the next two weeks tease that secrets will cause major problems. During the week of June 3-7, Steffy Forrester (Jacqueline MacInnes Wood) will reflect on her history with Liam Spencer (Scott Clifton). That’ll be thanks to Thomas Forrester (Matthew Atkinson) and his push to get them back together. He’ll manage to get some positive memories swirling around in Steffy’s head.

Nevertheless, that’s exactly what Zoe will want Xander to do. Over with Florence “Flo” Fulton (Katrina Bowden), she’ll face crushing guilt as Hope Spencer (Annika Noelle) and Liam Spencer (Scott Clifton) prepare for her annulment. Flo will eventually meet up with Xander and Zoe to discuss where things stand, which will cause Xander to hurl a serious threat.

It sounds like Xander will make it clear that they’re going to confess. He may argue that Hope will hear the news from him if they don’t. Elsewhere, Carter Walton (Lawrence Saint-Victor) will have some advice to pass along. He’ll speak from experience – both personal and professional – as he weighs in on Hope’s desire to end her marriage.

Carter may think Hope needs a little more time to decide, but Thomas will step up to make sure this annulment stays on track. Over with Ridge Forrester (Thorsten Kaye), he’ll try to make Brooke Forrester (Katherine Kelly Lang) see that some good can come from all this. Ridge will want Brooke to accept that maybe Liam belongs with Steffy the girls. He won’t see why Hope shouldn’t be Douglas Forrester’s (Henry Joseph Samiri) mom and possibly a love interest for Thomas as well.

Ridge will understand why Brooke’s frustrated, but he’ll think they should at least consider the happiness that could come down the road. Nevertheless, Brooke will stick to her guns and insist that “Lope’s” marriage must be saved. She’ll seek out Hope and do her best to talk some sense into her before the legal papers are signed.

Brooke won’t succeed, so that’ll leave Liam and Hope to begin their annulment meeting. It won’t be long until Xander barges in with a big announcement. The Bold and the Beautiful spoilers say Xander will plan on telling the truth, but it won’t pan out. This B&B secret will still be under wraps during the week of June 10-14.

Just when the Xander drama starts to wind down, Flo will have to deal with another serious crisis. That’s because Thomas will accidentally learn the truth about Beth! After the secret spills again, Flo should be at the end of her rope.

Back with Liam, he’ll lean on Steffy as he deals with his finalized annulment. The Bold and the Beautiful spoilers say Steffy will be glad to help, but comforting Liam could lead to growing feelings. Steffy will have to decide how she truly feels and what she really wants.

It sounds like the next two weeks will bring some great action. We’ll give you updates as B&B details emerge. Stay tuned to the CBS soap and don’t forget to check CDL often for the latest Bold and the Beautiful spoilers, updates, and news.