The Bold and the Beautiful Spoilers: Steffy Invites Liam To Move In and Reunite – Makes Hope’s Dream a Reality

BY Heather Hughes on June 4, 2019 | Comments: one comment
Related : Soap Opera, Spoiler, Television, The Bold and the Beautiful 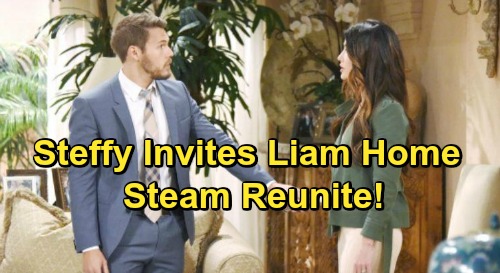 The Bold and the Beautiful (B&B) spoilers tease that Steffy Forrester (Jacqueline MacInnes Wood) will do some eavesdropping. She’ll listen nearby as Ridge Forrester (Thorsten Kaye) chats with Liam Spencer (Scott Clifton) about the end of his marriage. Liam will have a lot of emotions pouring out as he looks to the future.

Ridge won’t want to be pushy, especially when Liam’s still coming to grips with his annulment to Hope Spencer (Annika Noelle). However, he may subtly steer the conversation in Steffy’s direction. Ridge may do some fishing to see where Liam stands. He’d love to see Steffy in love again and building a family with Liam like she originally planned.

Even though Ridge may not spell it out, he’ll still prompt a conversation about Steffy. The Bold and the Beautiful spoilers say Liam will admit Steffy’s wonderful and will always hold a special place in his heart. She’ll end up comforting Liam as he deals with his annulment pain, so he’ll think she’s a special gal for being there for him.

Liam will feel like Kelly Spencer (Zoe Pennington and Chloe Teperman) and “Phoebe Forrester” (River Davidson and Madeline Valdez) couldn’t ask for a better mom. He’ll gush about all of Steffy’s great qualities, so that should touch Steffy and stir up old feelings even more. Just knowing how much she still matters to Liam will leave Steffy leaning toward a reunion again.

The Bold and the Beautiful spoilers say Steffy will make a pitch to Liam during the week of June 10-14. She’ll offer the opportunity to make a permanent move home and reunite with the girls. Steffy will take the first step toward honoring Hope’s wishes about Liam being a full-time dad. She’ll want Liam to be there for Kelly and “Phoebe” as much as possible.

Of course, this will serve as a huge step forward in Liam and Steffy’s relationship, too. It may take a while for them to officially reunite, but some “Steam” happiness is just around the corner. That should change as the Beth secret trickles out and eventually makes its way to Steffy.