BY Kinsley Goldman on June 10, 2019 | Comments: one comment
Related : Soap Opera, Spoiler, Television, The Bold and the Beautiful 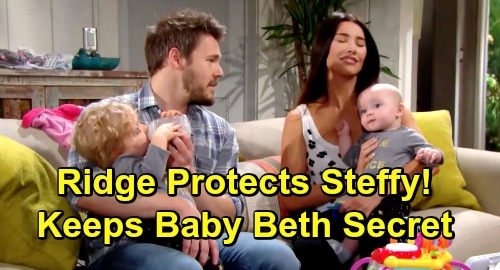 The Bold and the Beautiful (B&B) spoilers tease that the big secret will be spilled once again during the week of June 17-21. Someone else will find out that Beth Spencer is alive, but who’s it going to be? To answer that, we have to remember who knows the truth and consider why they might blab.

Eavesdropping is always a possibility, but there’s a good chance this will be a deliberate confession. Zoe Buckingham (Kiara Barnes) seems to have stood the strongest throughout all this, so it probably won’t be her. Shauna Fulton (Denise Richards) will likely pop back up by then, but it’s doubtful she’ll run her mouth either.

Xander Avant (Adain Bradley) is an option, but it makes more sense for Thomas Forrester (Matthew Atkinson) to be the secret spiller in this case. He’ll learn the whole story during the week of June 10-14, so he’ll be fired up and ready to share. The Bold and the Beautiful spoilers say Thomas will ultimately pay Steffy Forrester (Jacqueline MacInnes Wood) a visit. He’ll insist that he can’t wait any longer to tell her the truth.

However, it’d be a mistake for B&B to drop the bomb on Steffy so soon. We can’t rule it out since the show makes ill-advised decisions sometimes, but it’d be better for Steffy to get settled in a reunion with Liam Spencer (Scott Clifton) first. There needs to be more at stake for her when the shocker strikes.

It’s worth mentioning that Wyatt Spencer (Darin Brooks) will overhear something about Beth and demand an explanation this week. He’ll push Florence “Flo” Fulton (Katrina Bowden), Xander and Zoe to tell him what’s really going on.

Of course, Wyatt would surely tell Hope Spencer (Annika Noelle) the truth in a heartbeat, so we can’t have him finding out yet. The secret crew should be able to cover their blunder for now.

That brings us back to Thomas. If he doesn’t tell Steffy, who will he tell? Ridge Forrester (Thorsten Kaye) might be a good option. He’s on “Team Steam” and knows how happy “Phoebe” has made Steffy. Would this father really want to destroy his own daughter’s happiness for Hope’s sake?

Ridge would be conflicted due to his marriage to Brooke Forrester (Katherine Kelly Lang), but that’s an excellent reason for him to keep the secret. It’ll just mean more drama when everything blows up. Telling Ridge would give Thomas an ally to confide in and someone to keep him from blabbing when the guilt becomes too much.