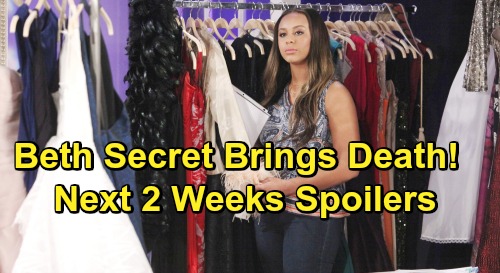 The Bold and the Beautiful (B&B) spoilers for the next two weeks tease that the drama’s about to heat up. During the week of June 17-21, Hope Logan (Annika Noelle) will be deeply distraught over the photo Thomas Forrester (Matthew Atkinson) deleted. Of course, Thomas will likely suggest that Hope must’ve accidentally gotten rid of it. He’ll quickly shift her attention to more important matters.

Hope will remain devastated, but Thomas will do his best to distract her with a kiss and a pitch for their future. She’ll maintain that she wants to take things a step at a time with no expectations, but Thomas will be impatient. He’ll keep up his manipulation tactics, but Brooke Forrester (Katherine Kelly Lang) will become his next obstacle.

Brooke will sense that Thomas is using Douglas Forrester (Henry Joseph Samiri) to mess with Hope’s emotions. She’ll feel like it’s naturally messing with Douglas’ emotions, too. Brooke will call Thomas out for using his son as a pawn, but he won’t agree that’s what he’s doing. He’ll insist his love for Hope is real and so is Douglas’ love. Thomas will have every intention of forming a strong family unit.

Thomas will also present Hope with a gorgeous Forrester original this week. Despite her reservations about moving forward with Thomas, she’ll have to admit the dress is lovely and thoughtful. Hope could start to see the positive side of letting Thomas dote on her. It’d at least curb some of the awful pain she’s feeling.

Meanwhile, Florence “Flo” Fulton (Katrina Bowden) will panic when she learns what Wyatt Spencer (Darin Brooks) is planning. Now that he’s dating Flo and her Logan status is common knowledge, Wyatt will think Flo should get to know Steffy Forrester (Jacqueline MacInnes Wood) and Liam Spencer (Scott Clifton) a bit better. He’ll suggest it’s time to have a little gathering.

Flo will object and so will Steffy when she gets updates from Liam. She may be wary of forming too much of a bond with “Phoebe Forrester’s” (River Davidson and Madeline Valdez) “birth mother.” However, Liam might assure Steffy that the adoption is final and Flo doesn’t want the kid back. He may contend that no one’s going to take away Steffy’s daughter.

Later, Flo and Wyatt will indeed get together with Steffy and Liam. The Bold and the Beautiful spoilers say Steffy will offer gratitude for Flo. She’ll be so thankful that Flo gave birth to “Phoebe” and let her enter their lives. Afterward, Flo should feel even guiltier about her all her lies.

Zoe Buckingham (Kiara Barnes) will try to make Xander back off, but he’ll remain enraged about Thomas’ behavior. That rage could grow after Emma Barber (Nia Sioux) overhears the truth about Beth and spars with Thomas. Thomas’ obsession with Hope will take a wild turn, so big trouble’s brewing.

During the week of June 24-28, the Beth situation will explode with a stunning tragedy. The Bold and the Beautiful spoilers say someone will die, and Emma is rapidly becoming the top victim contender. Regardless, it’s clear that the stakes will be raised and far worse threats will be delivered.