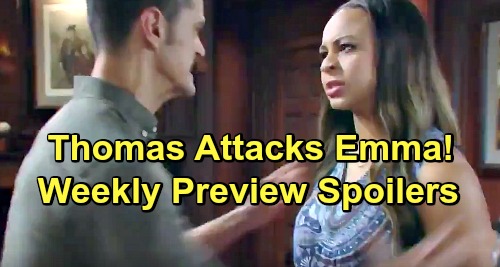 The Bold and the Beautiful (B&B) spoilers preview for the week of June 17-21 tease that some crazy moments are coming up. The baby swap storyline is about to take some frightening turns. First, let’s talk about Brooke Forrester’s (Katherine Kelly Lang) growing concerns. She’s already worried about how quickly Thomas Forrester (Matthew Atkinson) is making his move, but her worries will get far worse.

Brooke will realize Douglas Forrester (Henry Joseph Samiri) is being used like a chess piece on Thomas’ board. Thomas is manipulating Hope Logan (Annika Noelle) through an innocent child, so Brooke will find that disgusting. She’ll fill Ridge Forrester (Thorsten Kaye) in on Thomas’ obsession with Hope and argue that it’s not healthy. She just won’t think this is good for anyone involved.

Ridge will undoubtedly downplay his son’s issues, but Brooke will be adamant that Thomas needs to back off. She’ll also tell Thomas that to his face, but she won’t like the response. Thomas will contend that he’s in love with Brooke’s daughter. He won’t let Brooke or anybody else stand in the way of his future with Hope.

Xander Avant (Adain Bradley) will needle Thomas as he keeps making moves. He’ll have some smart remarks about Thomas working fast, which the secret ringleader won’t appreciate. Thomas will argue that Xander should stay out of this as Zoe Buckingham (Kiara Barnes) sports a nervous expression. He’ll add that Xander doesn’t know what might happen if he gets involved. There’s definitely tense vibe among the secret club now and that’s because Thomas is spinning out of control.

Liam Spencer (Scott Clifton) doesn’t trust Thomas, and he’ll wish that Hope wouldn’t trust him either. Hope doesn’t have total faith in Thomas just yet, but there’s still a bond between them. Thomas will try to build on that, but his plan will hit a snag when Emma Barber (Nia Sioux) returns and overhears too much. She’ll apparently discover that Beth Spencer is alive and vow to tell the truth.

Of course, Thomas can’t let Emme blab. The Bold and the Beautiful spoilers say Thomas will corner Emma and insist that she’s going to keep her mouth shut. When she tries to leave, Thomas will lunge forward to grab her. Uh-oh. This could get ugly! If Thomas is willing to manhandle Emma, what else is he willing to do? Will this confrontation go too far?

B&B’s weekly promo shows Thomas saying, “I don’t want to hurt you.” It’s possible he’ll be talking to Hope and piling on the manipulation. Thomas might say that just before he blurts out something about Liam never really loving Hope or always belonging with Steffy Forrester (Jacqueline MacInnes Wood). He could play it like he’s being brutally honest and giving Hope tough love.

However, it’s also possible this will be a threat directed toward Emma. Thomas may mean that he doesn’t want to physically harm her, but he will if necessary. The Bold and the Beautiful spoilers hint that this week’s cliffhanger will set up someone’s grim fate. Does Emma’s death loom or will someone else bite the dust?

It sounds like the excitement’s about to rev up! We’ll give you updates as other B&B news comes in. Stay tuned to the CBS soap and don’t forget to check CDL often for the latest Bold and the Beautiful spoilers, updates and news.