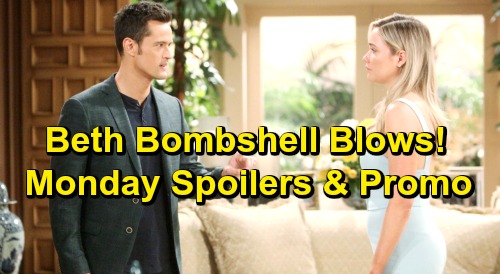 The Bold and the Beautiful (B&B) spoilers for Monday, June 10, tease that Thomas Forrester (Matthew Atkinson) will reel over Florence “Flo” Fulton’s (Katrina Bowden) revelation. His pressure was enough to make her divulge that Beth Spencer is alive, but he won’t believe it right away. Thomas fully believes Beth is dead and gone – just like Hope Spencer (Annika Noelle) and everyone else.

As a result, Thomas will think Flo’s playing some twisted game. He’ll call her a liar and insist that Beth died that night on Catalina Island. The Bold and the Beautiful spoilers say a guilty Flo will assure Thomas that’s not true. She’ll go through the story of how Dr. Reese Buckingham (Wayne Brady) desperately needed money and swapped Hope’s baby with a dead one so he could sell her little girl.

The Bold and the Beautiful spoilers say Flo really have to connect the dots for Thomas. He’ll struggle to understand how this all went down, but Flo will try to clear everything up. By the end of Monday’s episode, Thomas should reach the horrifying conclusion that Steffy Forrester (Jacqueline MacInnes Wood) illegally adopted Hope and Liam Spencer’s (Scott Clifton) daughter. That’ll set up full-blown rage on Tuesday!

In the meantime, Hope will be down in the dumps over her annulment. Unfortunately, she won’t get the love and support she needs from Brooke Forrester (Katherine Kelly Lang) – at least not at first. The Bold and the Beautiful spoilers state that Brooke will remain frustrated. She’ll think Hope has made a massive mistake by walking away from a man she loves so much.

Hope will maintain that she did what she had to do. She’ll reiterate that this is what’s best for the kids, and that’s all that matters. Brooke just won’t be able to get on the same page, which means this mother and daughter will get into an argument. Hope really needs someone to console her instead of berating her, so maybe Brooke will settle down and realize that soon enough.

It looks like another action-packed episode’s coming up. We’ll give you updates as other B&B news emerges. Stay tuned to the CBS soap and don’t forget to check CDL often for the latest Bold and the Beautiful spoilers, updates and news.