The Bold and the Beautiful Spoilers: Flo Learns About Wally Split – Wants Wyatt, But Will Baby Swap Secret Hold Her Back?

BY hellodrdavis on May 1, 2019 | Comments: one comment
Related : Soap Opera, Spoiler, Television, The Bold and the Beautiful 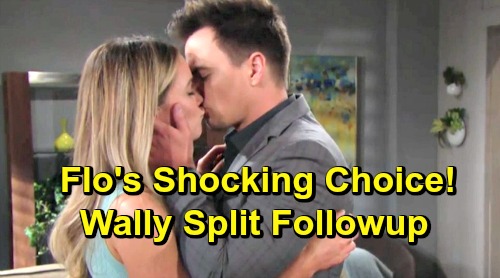 The Bold and the Beautiful spoilers tease that Florence “Flo” Fulton (Katrina Bowden) will be torn. She’s been feeling terribly guilty about her role in Reese Buckingham’s (Wayne Brady) baby swap and adoption scam. Of course, Flo played a big part in that scam, and she’s got everyone thinking that she’s Phoebe Forrester’s (Isabella de Armas and Rosalind Aune) birth mother.

As B&B viewers know, the secret is absolutely killing her, and she constantly seems to be on the verge of spilling the truth. But after she enters into the pact with Zoe Buckingham (Kiara Barnes) and her mom Shauna Fulton (Denise Richardson), she’ll be sworn to secrecy about the whole baby nightmare.

Flo will still feel guilty, but she’ll have both Zoe and her mother keeping an eye on her so she doesn’t spill the truth to Hope Spencer (Annika Noelle) and the rest of the Logan/Forrester clan.

It’s going to be excruciating for Flo, and the guilt she feels is going to seriously interfere with her life going forward. It looks like she’ll be working at Forrester Creations soon, which means that she’ll be around Hope a lot, and that will trigger guilt pangs on a daily basis. And soon, Flo will be wanting to move forward with her love life, but it looks like guilt may get in the way there, too.

According to B&B spoilers, Flo will lend a supportive ear to Wyatt Spencer (Darin Brooks) after Wyatt and Sally Spectra (Courtney Hope) break up. Wyatt and Sally will split after Wyatt catches Sally keeping a big, explosive secret from him. As B&B viewers know, Sally knows that Thomas Forrester (Matthew Atkinson) is plotting to break up Hope and Liam Spencer (Scott Clifton).

Wyatt will go nuts when he learns that Sally kept that secret, and even after Sally comes clean to Wyatt and apologizes, Wyatt won’t be able to get past it. The couple will split, and Wyatt will turn to his old flame Flo for support. Of course, Flo really never stopped loving Wyatt, so she’ll be happy to step in and cozy up to Wyatt.

But Flo will get another round of guilt pangs when Wyatt admits to her that it was a secret that ruined his relationship with Sally. It will remind Flo of the terrible baby secret that she’s keeping from Hope, Liam, and Steffy Forrester (Jacqueline MacInnes Wood), and Flo will worry about how Wyatt would react to her secret if he can’t forgive Sally for hers.

The bottom line is that Flo will be further tortured by what she’s keeping from everybody. A big part of her will want to come clean about the baby switch and just get it off her chest, but another part of her will know that if she wants a future with Wyatt, she’ll need to keep the secret forever.

It will be interesting to see how Flo handles things going forward. A new relationship with Wyatt, if that happens, could seriously motivate her to keep quiet for a long time. Or do you think that Flo’s guilt will be too much for her to bear? Stay tuned to the CBS soap and don’t forget to check CDL often for the latest Bold and the Beautiful spoilers, updates, and news.