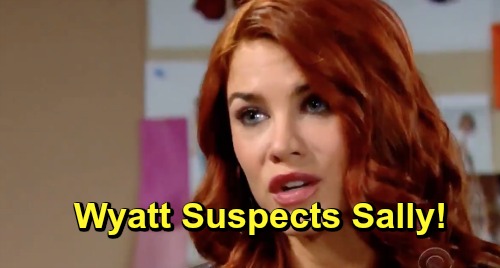 The Bold and the Beautiful (B&B) spoilers updates for Tuesday, April 30, tease that Hope Spencer (Annika Noelle) will be forced to relive her worst nightmare. After a power outage strikes at Forrester Creations, Hope will deal with horrific memories. She’ll be haunted by that fateful night on Catalina Island, which brought a difficult labor and the “death” of Beth Spencer.

While Hope faces this terrible trauma, Thomas Forrester (Matthew Atkinson) will argue with Sally Spectra (Courtney Hope). She’ll push Thomas to drop the idea of breaking up “Lope” and stealing Hope for himself. However, Thomas will insist that Liam Spencer (Scott Clifton) isn’t someone Hope can’t count on. He’ll trash Liam for bouncing between women so many times.

Of course, Sally will suggest the pot’s calling the kettle black! B&B fans know Thomas has done plenty of bouncing as well, so Sally won’t believe he’s any better. She’ll point out that Thomas hurt her deeply when he bailed on her twice. Sally will even admit to fantasizing about revenge, but she’ll note that Wyatt Spencer (Darin Brooks) came along and changed her world.

Thomas will stand by his plan to end Hope and Liam’s marriage. He won’t see what the big deal is since Liam can be with Steffy Forrester (Jacqueline MacInnes Wood) and Douglas Forrester (Henry Joseph Samiri) will get a mother. Thomas will think it’ll be a major win for all parties involved, but Sally won’t agree. She’ll contend that Thomas is only focusing on what HE wants.

Unfortunately, The Bold and the Beautiful spoilers say Wyatt will walk in on their intense conversation. It doesn’t look like he’ll overhear much, but he’ll still grow suspicious. When Wyatt asks for reassurance, Sally will gladly provide it. She’ll remind Wyatt of her love for him and insist she was just being there for Thomas as a pal.

Meanwhile, Hope will calm down after her memory mayhem. She’ll get closer to Thomas as she shares a secret about “Phoebe Forrester” (Isabella de Armas and Rosalind Aune). Hope will confess that although she misses Liam, Steffy and Kelly Spencer (Zoe Pennington and Chloe Teperman), she misses “Phoebe” the most. It’s hard having “Phoebe” away from LA and not being able to feel her presence.

Over with Zoe Buckingham (Kiara Barnes), she’ll keep trying to nudge Shauna Fulton (Denise Richards) and Florence “Flo” Fulton (Katrina Bowden) out of town. Flo would rather come clean and let the chips fall where they may, but Shauna will insist that’s not happening. They’ll discuss some possible outcomes of all this, but Shauna will desperately want her daughter to stay quiet.