BY Heather Hughes on May 1, 2019 | Comments: one comment
Related : Soap Opera, Spoiler, Television, The Bold and the Beautiful 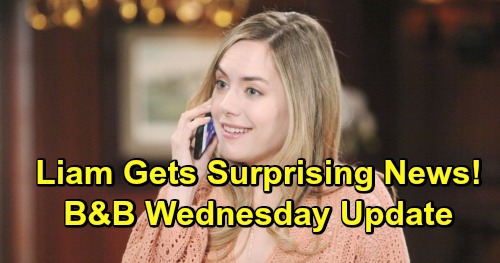 The Bold and the Beautiful (B&B) spoilers for Wednesday, May 1, tease that Wyatt Spencer (Darin Brooks) will have a serious fight with Sally Spectra (Courtney Hope). They’ll bicker about dinner plans, but there’ll be deeper issues lurking under the surface. Wyatt will think it’d be nice if they took Florence “Flo” Fulton (Katrina Bowden) out to for a meal. He’ll hope Sally can carve out some time for that soon.

Unfortunately, Sally will be buried in work at Forrester Creations. She’ll decline, which will leave Wyatt put out. He’ll grumble about how Sally passed up Bill Spencer’s (Don Diamont) offer, which wouldn’t have required as many hours on the job.

Once Wyatt’s resentment is showing, Sally’s insecurities will shine through. She’ll wonder why Wyatt’s so focused on Flo anyway. Wyatt will insist he just wants to make Flo feel welcome. He’s reconnected with her and she’s part of the Logan family, so Wyatt won’t see why it’s a problem.

The Bold and the Beautiful spoilers say an angry Sally will stomp off, but she’ll leave her phone behind. After Wyatt spots a message from Thomas Forrester (Matthew Atkinson) regarding their secret, he’ll be even more riled up.

At Flo’s apartment, she’ll make sure Zoe Buckingham (Kiara Barnes) and Shauna Fulton (Denise Richards) are hidden before she answers the door. It’ll be Wyatt on the other side. He’ll talk to Flo about her job offer before confessing his relationship woes.

Wyatt will also admit he’s been thinking about Flo a lot lately. After she kisses him quickly, Wyatt will pull Flo back to him for a more intense smooch. Shauna will decide to make herself known, which will bring a joke about wondering what year it is. She’ll be pleased to see Wyatt and Flo are growing closer.

After Wyatt mentions taking Flo to dinner sometime, say she’ll be on board with the idea. Wyatt will head out, which will leave Flo to revisit the baby swap discussion with Zoe and Shauna. They’ll determine that the secret must be kept, so a pact will be made.

In Paris, Liam Spencer (Scott Clifton) will have a chat with Amelia (Nicola Posener). B&B fans will recall that she’s the nanny Steffy Forrester (Jacqueline MacInnes Wood) hired for the girls.

Amelia will assure Liam that both Kelly Spencer (Zoe Pennington and Chloe Teperman) and “Phoebe Forrester” (Isabella de Armas and Rosalind Aune) are his daughters – regardless of “Phoebe’s” blood ties.

Amelia will encourage Liam to take her place there in Paris while Thomas Forrester (Matthew Atkinson) works on Hope Spencer (Annika Noelle). He’ll think Hope needs to make this choice for Liam.

Thomas will encourage Hope to end things with Liam so he can be a good dad. He’ll believe Hope can be a good mom to Douglas Forrester (Henry Joseph Samiri) as well, but Hope won’t agree to anything yet.

Finally, The Bold and the Beautiful spoilers say Hope will reach out to Liam. After she asks how it’s going in Paris, Hope will bring up Flo’s potential new job. She’ll ponder how Steffy will react to the news, so it should be interesting to see how this plays out.

We’ll give you updates as other B&B details emerge. Stay tuned to the CBS soap and don’t forget to check CDL often for the latest Bold and the Beautiful spoilers, updates, and news.