BY hellodrdavis on April 30, 2019 | Comments: 2 comments
Related : Soap Opera, Spoiler, Television, The Bold and the Beautiful 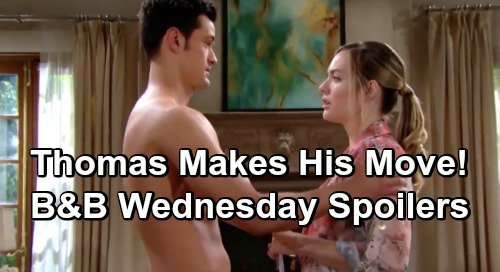 The Bold and the Beautiful spoilers for Wednesday, May 1, tease that Thomas Forrester (Matthew Atkinson) will continue to manipulate Hope Spencer (Annika Noelle). Thomas managed to get Hope to insist that Liam Spencer (Scott Clifton) go to Paris to visit with Steffy Forrester (Jacqueline MacInnes Wood) and the girls. It was pretty sneaky how Thomas showed Hope a video of Kelly Spencer (Chloe Teperman and Zoe Pennington) to get her to do what he wanted.

Of course, Thomas wants Liam out of the picture for a while so he can continue to work on Hope. Thomas wants nothing more than to get Hope for himself, and for Hope to become a permanent mother figure to Douglas Forrester (Henry Joseph Samiri), and he seems to be making headway toward that goal.

On Wednesday’s episode of B&B, Thomas will spend more time with Hope, during which he’ll push her to make the decision for Liam about whether he should be with her or with Steffy, Kelly, and Phoebe Forrester (Isabella de Armas and Rosalind Aune). Of course, that means that Thomas will try to persuade Hope to leave Liam.

And it looks like Hope will be susceptible to Thomas’ suggestion. She has been feeling guilty about keeping Liam from his daughter for months, and Thomas will just play on the feelings that Hope already has. It looks like Hope will seriously consider cutting Liam loose based on her conversation with Thomas.

Meanwhile, on the new episode of B&B on Wednesday, May 1, Wyatt Spencer (Darin Brooks) will be feeling weird. He has just walked in on Sally Spectra (Courtney Hope) and Thomas in the middle of an intense conversation about Hope.

Of course, B&B viewers know that Thomas and Sally were discussing Thomas’ plot to break up Hope and Liam. Sally’s privy to Thomas’ desires for Hope, but she failed to come clean to Wyatt about it when he directly asked her what was going on. And Wyatt could tell that he had walked in on something important.

According to B&B spoilers, Wyatt will distract himself by going to see Florence “Flo” Fulton (Katrina Bowden). He’ll decide to ask Flo to have dinner with him. Wyatt may want to talk about what’s bothering him, or he may just want to forget about the unsettling situation with Sally.

During his conversation with Flo, things will go a little too far and Flo will once again plant a big kiss on Wyatt. This will be kiss #3 for Wyatt and Flo, so clearly there are some underlying feelings there. We’ll see if Wyatt kisses back this time.