BY Marcy Cohen on April 30, 2019 | Comments: one comment
Related : Soap Opera, Spoiler, Television, The Bold and the Beautiful 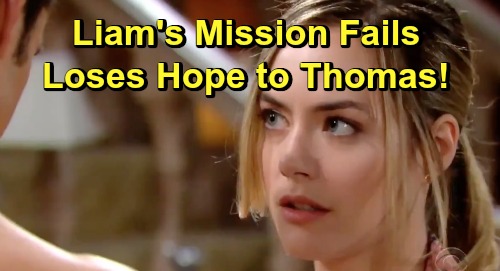 Liam will feel like he’s had enough of a visit with Steffy Forrester (Jacqueline MacInnes Wood) and the girls. He can always return later if need be, but he’ll believe Hope needs him more. The Bold and the Beautiful spoilers say Liam will rush home to put a stop to Thomas’ plan, but will he be too late? Has Thomas already made too much progress?

B&B fans know Hope tends to be a very forgiving soul anyway. She also isn’t doing the greatest emotionally. Thomas has been a source of friendship and comfort, so Hope may be hesitant to pull away. Besides, Hope would never take her issues with Thomas out on Douglas Forrester (Henry Joseph Samiri). She’ll still be there for the kid no matter what, which could give Thomas another chance.

In fact, Thomas might stand a better shot once all the cards are on the table. He might admit that he indeed has feelings for Hope and wants to be with her. Thomas could let Hope know that he’ll be waiting if things ever fall apart with Liam. He could express remorse whether he feels it or not and assure Hope that he’ll respect her wishes.

Meanwhile, Thomas can keep pushing the Kelly Spencer (Zoe Pennington and Chloe Teperman) and “Phoebe Forrester (Isabella de Armas and Rosalind Aune) need their dad angle. He might do it subtly once Hope’s onto him, but he’ll have Douglas on his side here. The kid’s been having a rough time without Caroline Spencer (Linsey Godfrey), so Thomas can use that as his example.

Of course, there will inevitably be more problems between Liam and Hope. Once their next round of drama hits, who will Hope turn to? It makes sense that it’ll be Thomas, especially once she knows he cares about her in that way. In other words, Liam’s discovery of the plot could be a blessing in disguise for Thomas. Honesty is the best policy and that could be what ultimately secures Thomas his reunion with Hope.