BY Sean O'Brien on May 19, 2019 | Comments: one comment
Related : Soap Opera, Spoiler, Television, The Bold and the Beautiful 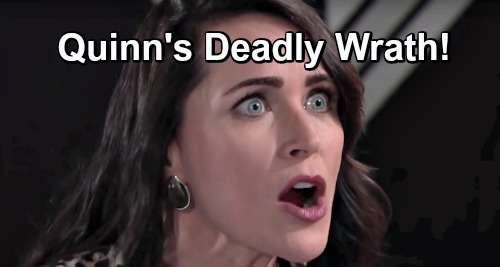 The Bold and the Beautiful spoilers tease that Quinn Forrester’s (Rena Sofer) generosity isn’t fully valued by Shauna Fulton (Denise Richards). With Eric Forrester’s (John McCook) approval, Quinn’s invite of the Fulton’s into the Beverly Hills mansion will prove to be a personal disaster.

If Shauna didn’t know what her daughter, Flo Fulton-Logan (Katrina Bowden) did, that would be one thing. But she is fully aware of Flo having knowingly participated in a crime that directly impacts Eric’s granddaughter, Steffy Forrester (Jacqueline MacInnes Wood), and affects many other people who he and Quinn care about. Plus, Flo’s employment at Forrester Creations could potentially hurt that family business.

There is no question that the Fuller’s and Fulton’s were tight when Quinn and Shauna were raising their children in Las Vegas, Nevada. Quinn and Wyatt Spencer (Darin Brooks), as he later came to call himself, needed to leave Vegas in a hurry many years ago and wound up in Los Angeles, California.

Contact wasn’t kept between Wyatt and his high school sweetheart, which always bothered him. That’s just one reason why he’s glad to reconcile with Flo now that Wally seems to have ended.

Wyatt, like his mother, is aware that Flo recently said she was the birth mother of the girl who’s now being called Phoebe Forrester (Isabella de Armas and Rosalind Aune) by her adoptive mother, Steffy. But Wyatt and Quinn don’t know that Flo lied to help her now-former somewhat significant other, Dr. Reese Buckingham (Wayne Brady), engineer a baby swap scheme.

Zoe Buckingham (Kiara Barnes) is right to continue calling out Flo. She is understandably alarmed that Bowden’s reckless character has not only accepted a job at Forrester Creations, but has also agreed to move into the Forrester’s home.

Both choices puts Flo in regular contact with Steffy and Hope Spencer (Annika Noelle), who are Beth-Phoebe’s mother’s. That is an unstoppable ticking alarm clock that will ring Flo out at some unknown future moment. When that happens, she, Reese, and Zoe will likely face varying forms of legal jeopardy.

Meanwhile, Shauna has told her daughter to simply forget about the past. Bad advice from someone who not only wants her daughter to continue living the good life that Flo’s just discovered genetic link to the Logan family, via Storm Logan (William deVry), now enables.

Instead of advising her daughter to do the right thing as soon as she learned what happened with Beth, Shauna counseled Flo like a crooked criminal defense attorney. As part of that cover, Richards’ character is also withholding the truth from a true friend who’s opened her heart and her home.

All of the above could have been avoided. Flo’s Logan status may have even helped her handle involvement in Reese’s scheme, if only she, or even Shauna came clean. But they didn’t and now both ladies are willingly enmeshed in Quinn’s personal life. There will be major fallout for the Fulton’s choices as a result.