The Bold and the Beautiful Spoilers: Brooke Heartbroken Over Lope Divorce – Horrified By Ridge’s Reaction To Split

BY hellodrdavis on May 19, 2019 | Comments: one comment
Related : Soap Opera, Spoiler, Television, The Bold and the Beautiful 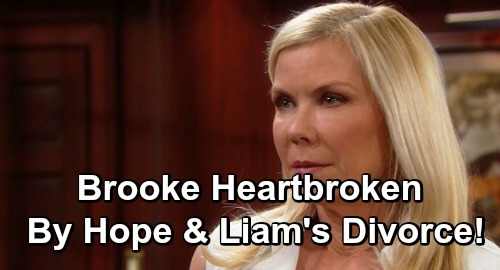 The Bold and the Beautiful spoilers tease that Brooke Forrester (Katherine Kelly Lang) will soon get some devastating news. She has been Hope Spencer (Annika Noelle) and Liam Spencer’s (Scott Clifton) biggest supporter over the past year. She was absolutely thrilled when Lope got married and were going to start a family of their own. But then tragedy occurred and Lope lost Beth Spencer, and things have been downhill for the couple ever since.

Throughout it all, Brooke has been right there by her daughter’s side, encouraging her to open up to Liam about her feelings and let him help her through her darkest days. Hope has vacillated between taking her mother’s advice and thinking that things would be best if she and Liam ended their marriage.

But then Thomas Forrester (Matthew Atkinson) happened. He returned home after Caroline Spencer’s (Linsey Godfrey) death with little Douglas Forrester (Henry Joseph Samiri) in tow. Hope began to gravitate toward Douglas, and Thomas has been slowly manipulating Hope’s feelings of guilt over keeping Liam from being a full-time dad to Kelly Spencer (Chloe Teperman and Zoe Pennington).

The Bold and the Beautiful spoilers say that sadly, Hope and Liam will choose to end their marriage. It looks like Hope will insist that a divorce is simply the only solution to their problems. The two will split, and Hope will have to tell Brooke about the development. That certainly won’t be an easy conversation, and Brooke will likely try to change Hope’s mind about the divorce.

But it looks like Hope will have her mind made up about the split, and Brooke will have no choice but to accept it. That will be tough, though, since Brooke’s primary concern is Hope’s happiness and she truly believes that the key to Hope being happy is being with Liam. Brooke will be distraught, and she’ll need somewhere to turn.

Of course, Brooke will turn to Ridge Forrester (Thorsten Kaye) for comfort and likely to vent about Lope’s breakup. But it seems that she won’t like what she hears in response. Ridge has long tolerated Lope’s marriage, but all along he has inwardly wanted Liam to be with his daughter Steffy Forrester (Jacqueline MacInnes Wood).

According to B&B spoilers, Ridge will honestly express his thoughts on the Lope spilt, which may include his desire for Steffy and Liam to ultimately get back together, or he may at least wonder aloud about that possibility. Either way, Brooke will be horrified and likely profoundly disappointed in her husband’s feelings.

Whether this will bring new tension into Brooke and Ridge’s marriage remains to be seen, but we’d say that Brooke may soon be blaming Thomas for the split, which certainly won’t help things in Bridge’s marriage. Ridge and Brooke made a decision earlier this year to stop interfering in their children’s lives, but that could prove difficult in light of Lope’s split.

Do you think that Brooke and Ridge’s marriage will be tested by Lope’s split? Stay tuned to the CBS soap and don’t forget to check CDL often for the latest Bold and the Beautiful spoilers, updates, and news.