BY Marcy Cohen on May 18, 2019 | Comments: one comment
Related : Soap Opera, Spoiler, Television, The Bold and the Beautiful 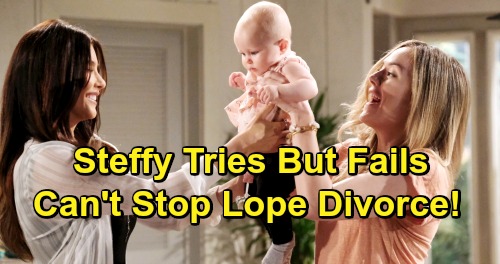 The Bold and the Beautiful (B&B) spoilers tease that Steffy Forrester (Jacqueline MacInnes Wood) will finally head home. Before she left for Paris, Steffy felt like she was a distraction to Hope Spencer (Annika Noelle) and Liam Spencer (Scott Clifton). She wanted to give them space to heal their marriage, which meant keeping “Phoebe Forrester” (Isabella de Armas and Rosalind Aune) away from Hope, too.

Steffy managed to curb Hope’s “Phoebe” obsession, but a lot has changed in her absence. The Bold and the Beautiful spoilers say things will get even worse just before Steffy returns to Los Angeles. Liam will struggle to keep his marriage intact, but Thomas Forrester (Matthew Atkinson) will keep fighting for his own reunion with Hope. He’ll do everything in his power to rip their relationship apart.

Steffy may come home with plans of getting through to Thomas. She’ll also think it’d help to have less distance between Liam and the girls. Hope already felt guilty about keeping Liam from his family when Steffy was in Los Angeles. Steffy’s move to Paris only made that guilt worse.

As Liam makes a last-ditch effort to save “Lope,” Steffy will do her part by showing back up. She may want Hope to see that they can truly be a blended family. Unfortunately, Hope just won’t agree with that – not after all of Thomas’ manipulation. He’s adding fuel to this “Liam should be with his family” fire, so Steffy’s move could actually come at a terrible time.

Just as Hope’s forced to make a difficult decision about her marriage, Steffy will reappear in town. Hope may view it as a sign that Liam, Steffy, “Phoebe,” and Kelly Spencer (Zoe Pennington and Chloe Teperman) should be together. She might witness a sweet moment and determine that this fam has to be reunited.

In other words, B&B spoilers say Steffy’s attempt to help may backfire. She might feel awful about that at first, but she could consider it a positive development down the road. It’s no secret that Steffy has battled lingering feelings for Liam, so a “Steam” reunion may be coming up before you know it.