The Bold and the Beautiful Spoilers: Week of May 20 Preview – Celebrates Steffy’s Homecoming – Promises Rebel Is ‘Ready to Rock’

BY Heather Hughes on May 17, 2019 | Comments: one comment
Related : Soap Opera, Spoiler, Television, The Bold and the Beautiful 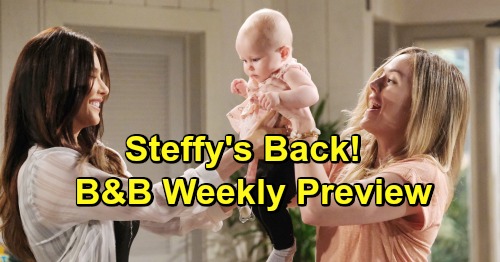 The Bold and the Beautiful (B&B) spoilers preview for the week of May 20-24 tease that the big day’s almost here. Of course, we’re talking about Steffy Forrester’s (Jacqueline MacInnes Wood) long-awaited return to the CBS soap. B&B gave Steffy her own promo to celebrate her homecoming and it’s filled with some of this character’s most epic moments.

The voiceover promises that Steffy is “a rebel, rival and ready to rock.” That certainly sounds like our Steffy! The Bold and the Beautiful spoilers say Steffy will prove all that’s true during her next stint. If you haven’t heard or have forgotten Steffy’s first airdate back, the preview offers a reminder. B&B fans can expect Steffy to hit town again starting Thursday, May 23.

Steffy will get a huge shock right off the bat thanks to Liam Spencer (Scott Clifton). He’ll be somber as he informs Steffy that his marriage is over. Steffy was hoping her time away would help Liam and Hope Spencer (Annika Noelle) grow closer, but she may wonder if she drove them apart instead. Hope definitely felt guilty about the distance between Liam and the girls.

However, Liam will likely assure Steffy that her extended trip wasn’t to blame. He’ll note that things fell apart after Beth Spencer’s death, and they just couldn’t put their lives back together again – at least not the ones they had before. Liam found a way to cope and move on, but Hope’s still struggling. That’s why Steffy will step up to support Liam’s soon-to-be ex-wife this week.

The Bold and the Beautiful spoilers say we’ll see some tender moments between Hope and Steffy. They’ll bond over the girls, especially “Phoebe Forrester” (Isabella de Armas and Rosaline Aune). That could be the calm before the storm – Storm Logan’s (William deVry) bio daughter to be exact.

Once Steffy makes a comeback at Forrester Creations, she’ll come face to face with Florence “Flo” Fulton (Katrina Bowden). It’s bound to be awkward since Steffy believes Flo is her adopted baby’s birth mother. She’ll inevitably have concerns about “Phoebe” as well as Flo’s new connection to the Logan clan. Flo’s job at FC could bring some uncomfortable challenges, so stay tuned.