The Bold and the Beautiful Spoilers: Darin Brooks Gets a New Job – Surprising New Role for B&B Star

BY Kinsley Goldman on June 13, 2019 | Comments: one comment
Related : Soap Opera, Spoiler, Television, The Bold and the Beautiful 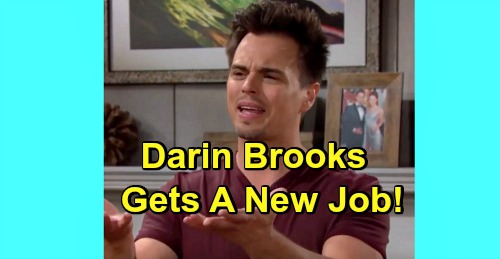 The Bold and the Beautiful (B&B) spoilers reveal that one CBS soap star has a new job! B&B fans know Darin Brooks as Wyatt Spencer, but he’s got an intriguing film in the works, too. Brooks stars in a new thriller called The Missing Sister, so this is certainly a fun way to branch out and do something a little different.

Brooks plays Frank in this movie about – you guessed it – a missing sister. Katrina Begin portrays Sharon, a woman who sets out to track down her estranged sibling and reconnect. Sharon pulls off her mission – or so she thinks. However, this so-called sister just might be an opportunistic impostor. Sharon ultimately suspects that her sis, Raven (Katie Michels), is far from the woman she seems to be.

There’s no word on how Brooks’ character fits into all that, but he most likely plays one of the film’s love interests. Perhaps Frank even helps crack the case in some way. Raven sounds like one tricky character, so it’s safe to say there’ll be suspicions floating around as she carries out her agenda. Frank might contribute to seeing the warning signs and helping the others admit that something’s off.

Craig Goldstein served as the director on this exciting movie from Cartel Pictures. According to IMDb, this film is set to be released on October 15, 2019. Other stars in The Missing Sister include Diora Baird as Collette, Mark Famiglietti as Dev, Maia Guest as Annalise, Momo Dione as Vinnie and more.

The Bold and the Beautiful fans may want to check out this suspense-filled film, especially if they’re eager to see a new side of Wyatt. Of course, there’s plenty of suspense coming up on B&B as well. The baby swap storyline is really heating up, so viewers can expect deadly danger soon enough. The show will hopefully leave us on the edge of our seats as this turns into one scorching summer!

What do you think about Darin Brooks’ side gig? Does The Missing Sister seem like a cool flick? Are you ready for the big reveal on B&B? The Bold and the Beautiful spoilers say some great drama’s ahead, so stay tuned. We’ll give you updates as other news comes in. Stick with the CBS soap and don’t forget to check CDL often for the latest Bold and the Beautiful spoilers, updates and news.