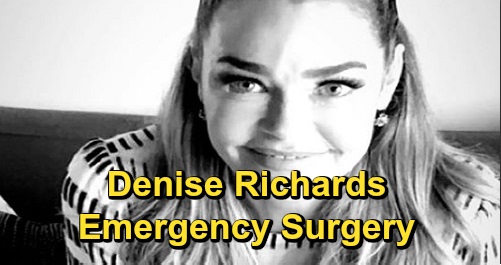 The Bold and the Beautiful (B&B) spoilers reveal that Denise Richards (Shauna Fulton) is speaking out about a difficult health crisis and the important lesson it taught her. B&B fans know Shauna’s hoping for a bright future with Ridge Forrester (Thorsten Kaye) – and she’s willing to be patient. Whenever Ridge is ready to move on from Brooke, Shauna intends to be waiting.

Unfortunately, waiting turned out to be the worst thing Shauna’s portrayer could’ve done! That’s because Richards ignored painful symptoms and assumed they would just go away. When the pain became more intense instead, Richards finally had to do something about it.

Richards’ husband, Aaron Phypers, posted some before-and-after pics on Instagram to share her story. Afterward, Richards reposted the photos on her own Instagram account and offered additional info. She wanted her fans to know how crucial it is to listen to your body when it tells you something’s not right.

“I thought I had one femoral hernia, I actually had 2 femoral & 2 inguinal,” The Bold and the Beautiful actress said. “And I waited way too long & didn’t even tell my husband how bad I was feeling (I know it was stupid) … gotta always listen to our bodies & take care of ourselves.”

Richards thanked her hubby for taking such great care of her after her emergency surgery a couple months ago. The B&B star also talked about how women in her position tend to just press on and that’s not always the right call. “Being a mom, wife, & having a career sometimes it’s easier to just be strong and power through,” Richards said.

In this case, Richards acknowledged that she should’ve done something about her symptoms sooner and now wishes she had. Fortunately, the surgery went well and she’s so grateful to the medical team that helped her out. It’s great that Richards is sharing her story since it might help others who are ignoring pain out there. Sometimes you have to pay attention and accept that something more is going on.

My hubby posted this & I need to actually thank him for taking such great care of me. This was a couple months ago & turned out to be a good lesson for me to always listen to my body. Being a mom, wife, & having a career sometimes it’s easier to just be strong and power through, I thought the pain & my other symptoms would just go away. They did not and got a lot worse. I’m so grateful to @herniadoc & her fabulous team. I thought I had one femoral hernia, I actually had 2 femoral & 2 inguinal. And I waited way too long & didn’t even tell my husband how bad I was feeling (I know it was stupid) … gotta always listen to our bodies & take care of ourselves. #Repost @aaronwilliamcameron ・・・ To the most incredible woman my soulmate. I am always in awe of your Beauty perseverance, dedication in all you do. These photos taken a couple of months ago from an emergency procedure femoral hernia not one but four! 6 hours waiting close by. Love you baby everyday getting stronger! @deniserichards