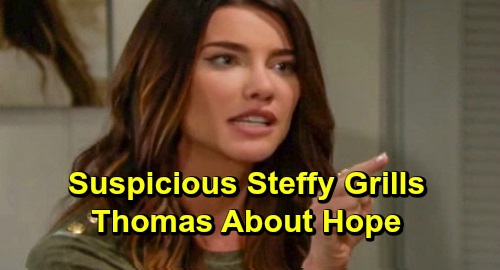 The Bold and the Beautiful (B&B) spoilers tease that Thomas Forrester’s (Matthew Atkinson) interest in Zoe Buckingham (Kiara Barnes) will spark plenty of suspicions – including some from his sister. Steffy Forrester (Jacqueline MacInnes Wood) knows better than to just believe things Thomas says right off the bat. She likes to grill him a bit and try to get a feel for what he’s really up to.

That’s exactly what Steffy will do during the week of December 23-27. B&B fans know Liam Spencer’s (Scott Clifton) hoping to expose Thomas’ scheming side. He’s convinced that Thomas is still up to no good and intends to prove it. Steffy just wants the truth, but she’s aware that truth could be troubling. Thomas has proven that he’s a pretty intense guy, especially when it comes to Hope Logan (Annika Noelle).

After everything Thomas has done to win Hope’s heart, Steffy will find it difficult to accept that her brother has moved on. Not too long ago, Thomas was assuring Steffy that she could have Liam and he could have Hope. He had a very clear view of the future, so Steffy will wonder what changed for Thomas – if anything really did at all.

The Bold and the Beautiful spoilers say Thomas will promise that he’s sworn off Hope. He’ll insist he just realized it was time to let go. Thomas will argue that he isn’t hooked on Hope anymore and tell Steffy that she has nothing to worry about. He’ll want Steffy to believe that his feelings for Zoe are real and he intends to move forward with her.

As of right now, that isn’t true. Thomas is still scheming to woo Hope, but he thinks playing hard to get will do the trick. He feels like he can make Hope miss what she doesn’t have and get her jealous over his growing bond with Zoe.

Even so, Thomas is pretty convincing when he’s trying to cover up his true motives. Will Steffy believe Thomas is done with Hope or will she remain wary? The Bold and the Beautiful spoilers say plans will get complicated on all sides, so don’t miss what’s in store. We’ll give you updates as other B&B news comes in. Stick with the CBS soap and don’t forget to check CDL often for the latest Bold and the Beautiful spoilers, updates and news.