The Bold and the Beautiful Spoilers: Flo and Shauna Loving Logan Life – Out On The Street After Baby Swap Reveal

BY Sean O'Brien on May 12, 2019 | Comments: one comment
Related : Soap Opera, Spoiler, Television, The Bold and the Beautiful 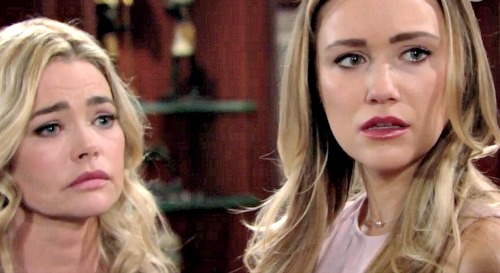 The Bold and the Beautiful spoilers tease that the Fulton women are thrilled with their newfound existence. Working stiffs in Las Vegas, Nevada, no more. Flo Fulton, now also Logan (Katrina Bowden) and her mother, never a wallflower, Shauna Fulton (Denise Richards), are embracing a nouveau riche lifestyle in Los Angeles, California.

B&B fans are all wondering how long all of this will last. Would the Logan’s turn on their own family even considering the Beth Spencer (Isabella de Armas and Redford Prindiville) reveal? It’s impossible to offer a certain yes because Hope Spencer (Annika Noelle) and Liam Spencer (Scott Clifton) are known to be so forgiving.

However, Lope has never encountered anything like what Flo aided the to-be notorious Dr. Reese Buckingham (Wayne Brady) in doing. That addicted gambler was into a sleazy bookie for two hundred large, which led to Zoe Buckingham’s (Kiara Barnes) life being threatened by John Travolta’s brother.

Flo was literally written into the picture as Reese’s seeming girlfriend who foolishly followed him from Vegas. He then convinced her to pose as Beth’s birth mother in order to secure a quarter-million dollar payment.

The fifty dimes extra was given by Reese to Flo for her help. She hadn’t asked for it, which shed some positive light on both characters.

Flo wasn’t participating in that event for any selfish reason and Reese was genuinely trying to keep Zoe safe. He kept none of the money Taylor Hayes (Hunter Tylo) paid him so that Steffy Forrester (Jacqueline MacInnes Wood) could complete the claimed private adoption of the girl she came to call Phoebe Forrester, with the first name moniker being applied in honor of her lost, fraternal twin.

Wyatt Spencer’s (Darin Brooks) notice of Flo’s fancy new car was corrected. She told her one-time and seeming again significant other that the vehicle she’d just gotten was newish.

The ride Flo is taking the Logan family on will assuredly crash whenever the Beth reveal fully breaks. Because Miss Fulton-Logan could have, at any point, stopped Lope’s grief. So, it seems like an ejection of this particular Logan family member is destined.

While Storm Logan (William deVry) is assumed as Flo’s biological father, the shift in Miss Logan’s reputation could bring a further reveal. Considering that Storm is considered selfless, that his father’s past was controversial, and that Stephen Douglas (Patrick Duffy) is still living, B&B may further deepen Flo’s backstory by having an assumed dad shift as well.