The Bold and the Beautiful Spoilers: Hope’s Heartbreaking Mother’s Day – Will She Embrace Motherhood With Douglas?

BY hellodrdavis on May 11, 2019 | Comments: one comment
Related : Soap Opera, Spoiler, Television, The Bold and the Beautiful 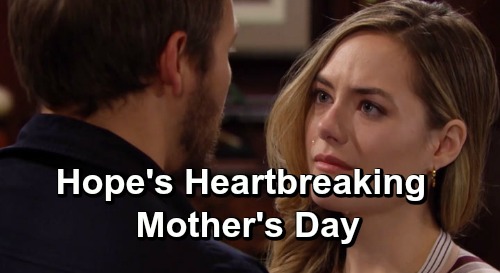 The Bold and the Beautiful spoilers tease that Hope Spencer (Annika Noelle) has a lot on her mind these days. As B&B viewers know, she’s still grieving the loss of her daughter, Beth Spencer, and that’s a lot to deal with on its own. But now she’s got Thomas Forrester (Matthew Atkinson) and Liam Spencer (Scott Clifton) fighting over her and it’s all a bit much.

Of course, Thomas wants Hope to leave Liam and be a family with him and Douglas Forrester (Henry Joseph Samiri). Hope has certainly been tempted to take on a mother-type role with Douglas, although she’s been clear that she only views Thomas as a friend. But Thomas still has a strong pull on Hope because of Douglas, whom Hope cares deeply about.

And it doesn’t help matters that deep down, Hope agrees with Thomas that Liam should be a full-time dad to Kelly Spencer (Chloe Teperman and Zoe Pennington) and Phoebe Forrester (Isabella de Armas and Rosalind Aune). It wasn’t that long ago that Hope took off her wedding ring and tried to push Liam and Steffy Forrester (Jacqueline MacInnes Wood) back together herself.

So, it hasn’t been too surprising for B&B viewers that Hope has been susceptible to all of Thomas’ squawking about family and motherhood, and to his pressure for Hope to make the decision for Liam to go be with Steffy and the girls. Thomas knows that Hope is in a vulnerable place right now and that while she desperately wants to be a mother, she can’t bear the thought of trying to have another child.

And that’s why Thomas’ strategy of using Douglas to get to Hope has been as successful as it has been. Granted, Hope hasn’t immediately decided to leave Liam to be a mom to Douglas, but she’s certainly pointed in that direction. And while TPTB haven’t formally made Mother’s Day a part of the storyline, we can’t help but notice that Hope is facing a big decision about motherhood and several children’s futures during this time.

Of course, Mother’s Day would be a terribly heartbreaking day for Hope, who is really struggling with the loss of Beth and the first baby that she miscarried. And we wonder how the holiday might factor in to the big decision that Liam is putting on Hope right now.

As B&B viewers know, the cliffhanger on Friday, May 10th, involved Liam directly asking Hope what she really wanted – to stay married to him, or to go be with Thomas and be a mom to Douglas. That’s a big decision for Hope, and one that she won’t take lightly.

Given the myriad of B&B spoilers for next week, it appears that Hope will choose her marriage to Liam, which will disappoint Thomas. But we bet that her decision will also come with a promise to always be there for Douglas. Hope won’t want to let Douglas down, as there’s a big part of her that will always feel like Douglas is her last opportunity to be a mother-figure in anyone’s life.

And all of that will give Thomas hope that he’ll still be able to get through to Hope and win her over eventually. B&B spoilers indicate that Thomas is not going to stop trying to get Hope for himself, and he’ll keep using Douglas to do so.

At any rate, it looks like B&B viewers are in for more Liam-Hope-Thomas conflict, and for more interaction between Hope and Douglas going forward, probably manipulated by Thomas. Do you think Hope will ultimately embrace motherhood with Douglas and turn her back on Liam? Stay tuned to the CBS soap and don’t forget to check CDL often for the latest Bold and the Beautiful spoilers, updates, and news.