BY Heather Hughes on May 11, 2019 | Comments: 2 comments
Related : Soap Opera, Spoiler, Television, The Bold and the Beautiful 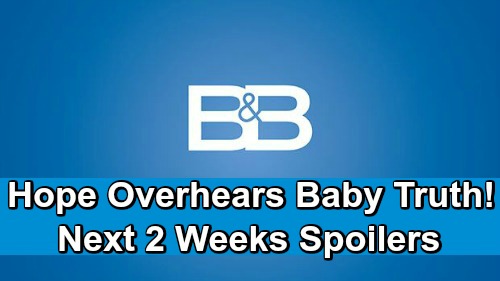 The Bold and the Beautiful (B&B) spoilers for the next two weeks tease we’ll see more conflict along with some sneaky plans. During the week of May 13-17, Thomas Forrester (Matthew Atkinson) will ignore Liam Spencer’s (Scott Clifton) warning to stand down. He won’t pay much attention to Hope Spencer’s (Annika Noelle) wishes either. Thomas will be convinced that if he can just break up “Lope,” the rest will fall into place.

Elsewhere, Florence “Flo” Fulton (Katrina Bowden) will allow herself a few moments of peace. She’ll feel a sense of real comfort with Wyatt Spencer (Darin Brooks), so she’ll forget her baby swap secret for a while and focus on her future. Flo’s happiness won’t last, but she should enjoy a break from all the guilt and drama.

Later, Flo and Shauna Fulton (Denise Richards) will be given a generous offer. They’ll get to upgrade their living arrangements because of it, so a mansion move-in must be coming up. Over with Katie Logan (Heather Tom), she’ll turn to Shauna for assistance. Brooke Forrester (Katherine Kelly Lang) will be against the plot that’s forming, but she’ll back Katie up anyway.

The Bold and the Beautiful spoilers say Shauna will agree to seduce Bill. It’ll be part of a test that Katie hopes he’ll pass. Of course, Brooke will worry about all the ways this could go wrong. Bill is awfully fond of hookups, so Brooke will fear he’s going to give Shauna what she wants. She’ll even worry that if Bill rejects Shauna, he’ll figure out Katie’s game and lash out at her over it.

However, Katie won’t be concerned about that. She’ll think she can handle Bill’s reaction; it’s his loyalty she’s worried about. Thankfully, B&B spoilers say Bill will come through for Katie. He’ll make it clear that he doesn’t want to make the same old mistakes. Katie will ultimately accept Bill’s proposal, so they’ll share the good news with Will Spencer (Finnegan George) soon enough.

During the week of May 20-24, Thomas will kick his manipulation into high gear. He’ll work harder than ever to destroy Liam and Hope’s bond. Thomas will think he can inch closer to a reunion with Hope, so he’ll make some powerplays to set that in motion. You can bet Liam won’t like where this is headed.

Other Bold and the Beautiful spoilers say Hope will overhear a risky conversation. She’ll listen in on Flo’s chat with Zoe Buckingham (Kiara Barnes), so she’ll quickly realize they’re hiding something. Hope will hear Beth Spencer’s name during this discussion, so she’ll seek some answers. She’ll corner Zoe and Flo to demand the truth right now!

Nevertheless, Flo and Zoe won’t be blabbing anytime soon. They’ll just have to think fast and come up with a plausible reason for sparring over Beth. We’ll give you updates as other B&B details emerge. Stay tuned the CBS soap and don’t forget to check CDL often for the latest Bold and the Beautiful spoilers, updates, and news.