BY Heather Hughes on May 9, 2019 | Comments: one comment
Related : Soap Opera, Spoiler, Television, The Bold and the Beautiful 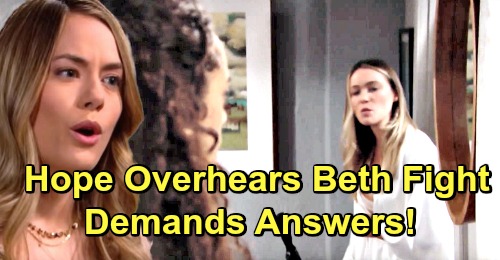 The Bold and the Beautiful (B&B) spoilers tease that Hope Spencer (Annika Noelle) will have a lot on her mind. She’ll deal with Liam Spencer (Scott Clifton) and Thomas Forrester’s (Matthew Atkinson) war for her heart as well as the lingering sting of losing Beth Spencer. Of course, Hope will continue to feel guilty about Steffy Forrester’s (Jacquelne MacInnes Wood) girls not having a full-time father.

Although Hope will struggle to focus, she should appreciate the distractions of work. Hope will have Florence “Flo” Fulton (Katrina Bowden) to lean on and train in her new position. That’ll keep Hope busy, so at least there’ll be less time to mull over everything that’s wrong in her life.

However, The Bold and the Beautiful spoilers say Hope will eventually add to the drama with a baffling discovery. Zoe Buckingham (Kiara Barnes) knew it was a bad idea for Flo to stick around Los Angeles. She thought accepting a job at Forrester Creations was an even worse idea. The closer Flo get to Hope, the more likely it becomes that the baby swap secret will get out.

It turns out Zoe will be part of the problem when she corners Flo and starts fighting with her. They’ll probably have a hushed argument somewhere at Forrester Creations. Zoe might insist that Flo should quit or at least concentrate on work instead of bonding with Hope. She’ll be concerned about Flo’s guilt taking a toll again, but perhaps she should really start worrying about a bigger threat.

Eavesdropping is quite common on B&B. That’s especially true when there’s a massive secret just waiting to be exposed. During the week of May 20-24, The Bold and the Beautiful spoilers say Hope will overhear something she shouldn’t. Flo and Zoe will be having a heated discussion about Beth, so Hope will be taken aback. She won’t understand why they’d be bickering about her dead baby girl.

Since Hope will be curious and maybe even hurt that her child’s being sparred over, she’ll demand the truth. Hope will want to know exactly why Zoe and Flo would need to argue about Beth. They obviously can’t tell Hope the real story, so they’ll cover their blunder and try to throw her off the trail.

Will this be the first step toward Hope getting her daughter back? Will Hope file this puzzle piece away for when other clues surface? We’ll give you updates as other B&B news comes in. Stay tuned to the CBS soap and don’t forget to check CDL often for the latest Bold and the Beautiful spoilers, updates, and news.