The Bold and the Beautiful Spoilers: Thomas Keeps Phoebe Baby Swap Truth a Secret, Sinks to a New Low

BY Heather Hughes on May 8, 2019 | Comments: 2 comments
Related : Soap Opera, Spoiler, Television, The Bold and the Beautiful 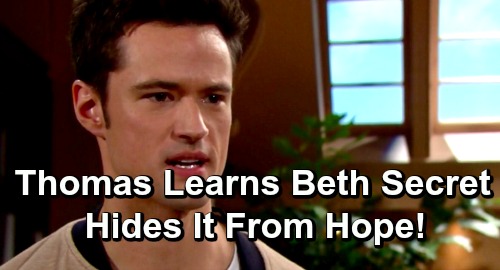 The Bold and the Beautiful (B&B) spoilers tease that Thomas Forrester (Matthew Atkinson) won’t give up his fight to be with Hope Spencer (Annika Noelle). He’s determined to tear Hope and Liam Spencer (Scott Clifton) apart, and the plan already seems to be working. Hope may have rejected Thomas, but she’s clearly got his proposal on her mind. She’s starting to wonder if Thomas has the right idea.

A “Lope” divorce seems inevitable at this point. That’s especially true since it’ll add to the chaos of the big reveal later. It’d be too easy if Liam and Hope were still married at that point. The best and messiest option is for Liam to reunite with Steffy Forrester (Jacqueline MacInnes Wood).

That would put Liam truly at the heart of the conflict when “Phoebe Forrester” (Isabella de Armas and Rosalind Aune) is exposed as Beth Spencer. Of course, The Bold and the Beautiful spoilers say that revelation may be a long way off. Secrets tend to trickle out on soaps, so there’ll surely be at least a couple more people who learn the truth.

Xander Avant (Adain Bradley) seems like a good option since he’d probably keep the secret for Zoe Buckingham’s (Kiara Barnes) sake. He wouldn’t be happy about it, but he also knows how Reese operates. Xander might take pity on Zoe for getting roped into this and vow to keep his mouth shut.

However, Thomas also seems like a likely contender to learn the baby swap secret. There’s still some buzz about Thomas possibly having a brief history with Florence “Flo” Fulton (Katrina Bowden). If that’s true and they had a fling around the time of the fake conception, Thomas would have to wonder if he was “Phoebe’s” father.

This is the kind of thing that could force the truth out of Flo, but it’s not the only option for exposure. B&B characters love to eavesdrop and Flo works at Forrester now. There’ll be plenty of opportunities for Thomas to learn too much. He could end up confronting Flo about the secret she’s keeping from Flo, but would she convince Thomas to stay tight-lipped?

If Thomas is with Hope by then, he might be willing to keep the secret under wraps. Thomas could easily fear that the baby would pull Liam and Hope back together. Plus, it would break his sister’s heart to lose “Phoebe.” Thomas certainly wouldn’t want to hurt Steffy with this shocking news. Her happy family would crumble, so Thomas might decide to keep quiet for his sake as well as Steffy’s.

Do you think Thomas will learn the truth about “Phoebe” and keep it from Hope? It’s a logical step since B&B has turned Thomas into an obsessed lunatic. It’d be perfectly reasonable for Thomas to sink that low. In fact, that may be why they’ve taken Thomas down this terrible path.