BY Olivia Marie on May 7, 2019 | Comments: 3 comments
Related : Soap Opera, Spoiler, Television, The Bold and the Beautiful 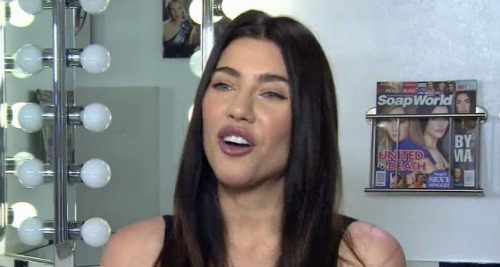 The Bold and the Beautiful (B&B) spoilers tease that Jacqueline MacInnes Wood, the actress who plays Steffy Forrester, gave a realistic insight to what it is like to be a new mother, famous or not! Also, she revealed why she didn’t wear the gown she picked out for the 2019 Daytime Emmy awards.

When Jacqueline first found out she was pregnant, she said she knew they wanted to name their child Rise. For the couple, the name meant that their child could “rise” above anything life threw at them.

Wood recalled a moment a few months ago. She had just brought Rise home from the hospital and they decided it was time to give him his first bath. She said she wanted it to be perfect.

So, she went into the bathtub holding her newborn son, sat in the relaxing water. Almost immediately, Jacqueline said that Rise “pooped all over her.” While it’s funny now, at the time, she wasn’t sure who to clean off first– Rise or herself.

Wood said that it was a life lesson for her. As much as she wants to plan for how things will go in parenting and her life, sometimes life throws something at you that you couldn’t have predicted.

The B&B actress said she loves her new role as a mother, as exhausting as it is. She lives a very active lifestyle and, so far, Rise has fit right in.

She called a moment just before she left her house for the 2019 Daytime Emmy Awards on Sunday, May 5. Like most mothers, she decided to feed him and planned on handing him over to his nanny. However, at some point, Rise spit up all over her new gown and she had to quickly change into another dress. So, the dress Wood wore that night was not the dress she bought for the event.

As for Wood’s win, she said it was a dream come true for her. It was validation that her work is appreciated by the network and B&B viewers.

Jacqueline noted that she hopes that the writers will give Steffy a new love interest and gets her off this crazy Liam Spencer (Scott Clifton) crazy train. Perhaps, it will be someone that B&B viewers have seen, the actress teased.

Don’t forget to come back later for more The Bold and the Beautiful (B&B) spoilers, news, and casting updates!