BY Heather Hughes on May 10, 2019 | Comments: 2 comments
Related : Soap Opera, Spoiler, Television, The Bold and the Beautiful 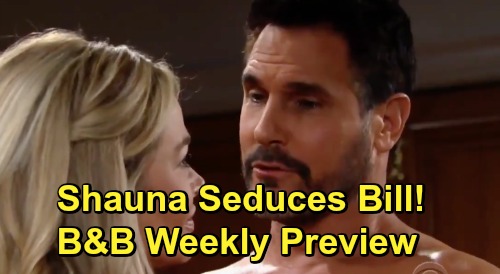 The Bold and the Beautiful (B&B) spoilers preview for the week of May 13-17 tease that Bill Spencer (Don Diamont) will be put to the test. Katie Logan (Heather Tom) loves Bill and would truly like a future with him. Unfortunately, she’s just not sure Bill can be trusted. Katie has been burned too many times to just assume Bill can give her the loyalty she deserves.

Nevertheless, Brooke Forrester (Katherine Kelly Lang) will think Katie should go for it. She’ll insist that her sister should give Bill another chance, but Katie won’t be willing to do that – not without some proof that he’s the changed man he claims to be. Katie will come up with a way for Bill to prove himself, but Brooke isn’t going to like this. She’ll feel like Katie’s setting herself up for sabotage here.

That’s because Katie will drag Shauna Fulton (Denise Richards) into this. She could see some chemistry going on when she witnessed their last encounter. Katie also knows they hooked up once upon a time. She’ll view Shauna as the perfect bait for the plot she’s got cooking. Katie will just need to know if Shauna’s in or out.

B&B spoilers say Shauna will have no qualms about what Katie’s suggesting. She’ll be asked to seduce Bill, so she’ll happily go along with idea. Shauna will figure if Katie’s plan succeeds, she’ll have done a good deed for Florence “Flo” Fulton’s (Katrina Bowden) new family member. If the plan fails, Shauna will at least have had some sexy fun.

Brooke has been with Bill enough times to know he’ll be tempted. She’ll worry that he’ll cave in and leave Katie heartbroken, but she’ll have to accept this is what Katie wants. The Bold and the Beautiful spoilers say Katie would rather get hurt now if it’s going to happen. There’s no point in remarrying Bill if he’s just going to make the same old mistakes.

The Bold and the Beautiful’s weekly promo shows Bill declaring, “You only live once, right?” He’ll be shirtless as he kisses Shauna, but this is all just B&B’s fake-out. In the end, Bill will insist that Katie’s the only woman he wants. He’ll pass the test, so Katie will put his engagement ring on by the end of the week.

It sounds like some exciting episodes are coming up. We’ll give you updates as other B&B news emerges. Stay tuned to the CBS soap and don’t forget to check CDL often for the latest Bold and the Beautiful spoilers, updates, and news.