BY hellodrdavis on September 30, 2019 | Comments: one comment
Related : Soap Opera, Spoiler, Television, The Bold and the Beautiful 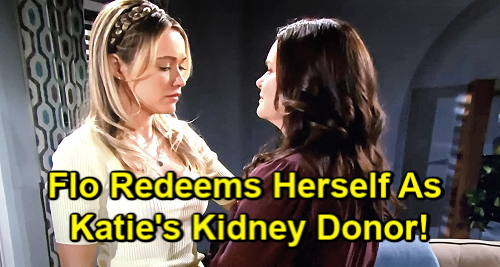 The Bold and the Beautiful spoilers tease that Flo Fulton (Katrina Bowden) will soon find herself in quite the predicament. As B&B viewers know, her aunt, Katie Logan (Heather Tom) has just found out that she’s in complete kidney failure and must go on dialysis immediately. She’s in dire need of a kidney donor, and the faster she gets one, the better.

Well, Flo has been looking for a way to redeem herself within the Logan, Forrester, and Spencer families. She and her mother Shauna Fulton (Denise Richards) are pariahs in the respective families and no one wants anything to do with them. Really, the only person who can even stand to be in the same room as Flo at this point is Wyatt Spencer (Darin Brooks), and that’s because he was once deeply in love with her.

But even Wyatt’s patience runs thin when he thinks about the turmoil that Flo put Liam Spencer (Scott Clifton) and Hope Logan (Annika Noelle) through. Sure, Flo didn’t steal Beth Spencer (River Davidson and Madeline Valdez) and it wasn’t her idea to keep Beth from her real parents, but she could have come forward long before she did and put an end to Hope and Liam’s grief.

Has Wyatt Spencer Really Moved On Quickly From Flo Fulton?

In fact, Wyatt was so distraught about Flo’s deception that he immediately went back to Sally Spectra (Courtney Hope), and soon thereafter proposed to her! Wyatt tends to jump into relationships quickly, and he really rushed his marriage proposal to Sally. Now the two are happily engaged, and Wyatt seems to think that he’s put the Flo nightmare behind him.

But has he? Under normal circumstances, it seems that it would be wise to question whether Wyatt has really moved on from Flo so quickly. But these aren’t going to turn out to be normal circumstances. According to B&B spoilers, Wyatt will soon learn something about Flo that might lead to some serious redemption in his eyes.

The Bold and the Beautiful spoilers say that Flo will get tested as a possible match for Katie as a kidney donor, and lo and behold, she’ll be a compatible donor! She’ll quickly gear up to undergo surgery that will leave her minus a kidney and save Katie’s life. And that’s going to leave a lot of people thankful to Flo. In fact, it will likely be the start of her eventual redemption among the Forrester, Logan, and Spencer families.

Families Will Be Forever Grateful To Flo Fulton For Donating Kidney

Of course, everyone will still be sure to let it be known that they don’t condone what Flo did to Hope, Liam, and Steffy Forrester (Jacqueline MacInnes Wood), but they will be forever grateful to Flo for saving Katie’s life. But what about Wyatt? He’s already a big softie when it comes to Flo – sure, he’s angry with her, but he’s also compassionate toward her plight. Once she’s donated her kidney to Katie, will he re-evaluate his feelings toward her?

He just might, and that could cause problems for Wyatt and Sally. With Flo finding redemption and Quinn Forrester (Rena Sofer) really pushing Wyatt to take Flo back, it’s possible that he might find himself wondering whether he’s made the right decision leaping into an engagement with Sally so quickly. We could end up seeing some real heartbreak for Sally down the line.

Do you think that Flo’s redemption will cause Wyatt to rethink his engagement to Sally? Stay tuned to the CBS soap and don’t forget to check CDL often for the latest Bold and the Beautiful spoilers, updates, and news.