The Bold and the Beautiful Spoilers: Monday, September 30 Update – Shauna Reels Ridge In – Thomas Gets Bombshell for Logan War

BY Heather Hughes on September 30, 2019 | Comments: one comment
Related : Soap Opera, Spoiler, Television, The Bold and the Beautiful 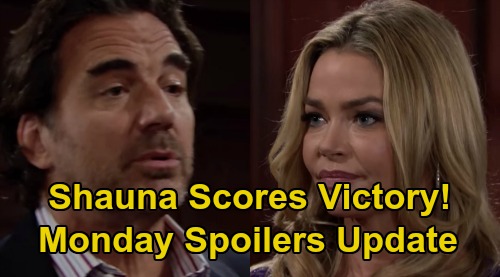 The Bold and the Beautiful (B&B) spoilers update for Monday, September 30, teases that Shauna Fulton (Denise Richards) will keep reeling Ridge Forrester (Thorsten Kaye) in. He obviously doesn’t approve of Florence “Flo” Fulton (Katrina Bowden) and her role in the baby swap plot, but Flo’s mom been supportive and kind. Ridge is growing weary of the constant conflict in his marriage, so Shauna’s proving to be a good listener.

That’ll continue to be the case on Monday’s B&B episode and beyond. As Ridge remains frustrated over the situation with Brooke Forrester (Katherine Kelly Lang), Shauna will promise she’s got his back. If Brooke refuses to be there for Ridge, he’ll have a friend in Shauna. Of course, Shauna would like to be more than that if possible. Based on all this bonding they’re doing, Shauna may think it’s going to happen for her.

Over with Thomas Forrester (Matthew Atkinson), he’ll seethe over his recent showdown with Brooke. That faceoff was awfully vicious, so it’s clear that Thomas is riled up and ready to make a move. The Bold and the Beautiful spoilers say Thomas will prepare for war on Monday. He’ll contend that the Forresters must be rid of the Logans – and his plot to push them away will begin with Ridge’s wife.

Brooke and Ridge’s relationship is already crumbling over Thomas, so he’ll know this won’t be too hard. In fact, Vincent “Vinny” Walker (Joe LoCicero) will make Thomas’ scheme easier than he ever thought possible. Thomas will be stunned when some excellent ammo just drops right on him. He’ll find out about Ridge and Shauna’s night together, so the wheels will immediately start turning.

Thomas will have no way of knowing what happened behind closed doors. The same goes for Vinny as well as Danny (Keith Carlos), the source of this information. However, the extent of Ridge’s guilt doesn’t matter. Thomas will realize Ridge spent the night alone with Shauna and kept it a secret from Brooke. He’ll view this as an explosive double bombshell that could do some serious damage.

Thomas will immediately get to work on delivering the shocker. The info can’t be trusted if it comes from him, so he’ll manipulate Danny into passing this news along later in the week. The Bold and the Beautiful spoilers say some hot drama’s ahead, so don’t miss all the action. We’ll give you updates as other B&B details emerge. Stay tuned to the CBS soap and don’t forget to check CDL often for the latest Bold and the Beautiful spoilers, updates and news.