The Bold and the Beautiful Spoilers: Steffy’s Perfect Match – Should She Fall for Bad Boy, Sophisticated Gentleman or True Sweetheart?

BY Heather Hughes on September 29, 2019 | Comments: one comment
Related : Soap Opera, Spoiler, Television, The Bold and the Beautiful 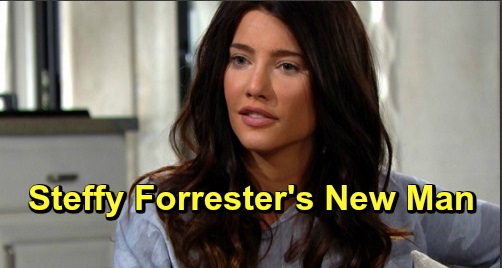 The Bold and the Beautiful (B&B) spoilers tease that many Steffy Forrester (Jacqueline MacInnes Wood) fans seem to be rooting for two things: more Steffy and a new man! B&B has been focusing on other characters lately, but Steffy will head back into the spotlight through some business and fashion stories this fall. It should be fun to see what’s in store for the character in the coming weeks.

However, love will have to wait. Steffy’s heart is still healing, and she’ll be busy battling out with her ruthless brother anyway. As if Thomas Forrester (Matthew Atkinson) hasn’t caused enough drama, he’ll be making trouble at Forrester Creations soon. Thomas may become a thorn in Steffy’s side, so she’ll have a lot on her plate.

When you combine that with Steffy’s lingering “Phoebe Forrester” aka Beth Spencer (River Davidson and Madeline Valdez) heartbreak, new love just doesn’t make sense for her just yet. Even so, it’s never too early to start thinking about the future. This is a soap, so Steffy can’t stay single forever.

Of course, it’s great that Steffy’s independent and will find a way to thrive despite her obstacles. She doesn’t need a man, but she’ll likely want one. There’s no reason why Steffy shouldn’t find someone to share her life with eventually. It’s all about whatever will make Steffy happy, and some handsome gent could bring something special to her life.

With that in mind, we should think about what kind of hunk would be best. There are certainly still some “Steam” fans out there, but Liam Spencer (Scott Clifton) hasn’t proven he can stay committed to Steffy. There’s no guarantee a new guy would either since this is The Bold and the Beautiful, which might as well be called The Torn and the Disloyal!

Even so, B&B would be wise to give Steffy a new love interest. Why not freshen things up? There are three types of guys that immediately come to mind as options. The first is someone stylish and suave. The show could go with a sophisticated and charming guy who’s a cut above. It might be interesting to see Steffy and somebody with real swagger. They could become quite the power couple.

Another option is someone who’s a little rough around the edges – perhaps a brawny man who’s a bit of a bad boy. It’d be nice to see Steffy with someone who could bring some fierce passion. B&B could offer some rugged guy who rocks Steffy’s world.

A third possibility would be a true sweetheart – a boy-next-door type who’d be on the safe side. Just someone adorable who views Steffy as a true goddess. She could use somebody who wants her and only her. Steffy’s had to deal with enough waffling for a lifetime, so it’d be refreshing to have some cute charmer woo her and ultimately win her heart.

What kind of love interest would you like to see for Steffy? What kind of man should B&B give her? The Bold and the Beautiful spoilers say some hot drama’s ahead, so stay tuned. We’ll give you updates as other news comes in. Stick with the CBS soap and don’t forget to check CDL often for the latest Bold and the Beautiful spoilers, updates and news.