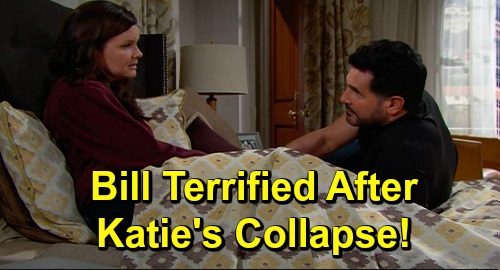 The Bold and the Beautiful (B&B) spoilers update for Friday, September 20, teases that Katie Logan (Heather Tom) will feel even worse. She’s been dealing with back pain and fatigue, which caused her to miss out on a trip to the park. Katie was too tired to tag along with Bill Spencer (Don Diamont) and Will Spencer (Finnegan George), so she urged them to go on without her.

Although Katie downplayed her issues, they’re actually quite serious. Bill will soon see just how serious after Katie’s sudden collapse. The Bold and the Beautiful spoilers say Bill will face total terror, but he’ll try to focus on the task at hand. He’ll tend to Katie and make sure the paramedics get there, so at least she’ll get the medical attention she needs ASAP.

Bill’s sure to be a nervous wreck as he wonders what’s going on. He’ll worry about Katie’s mysterious health problems, but he’ll assure her everything’s going to be OK. Bill will prove he’s devoted to Katie and will always come through when she needs him. He’ll just hope Katie’s medical team can figure this out before it’s too late.

Next week will bring the revelation that both Katie’s kidneys are failing. That’ll be a tough blow for Bill as well as the Logans. However, let’s focus on Brooke Forrester’s (Katherine Kelly Lang) current dilemma for now. She’s been stuck in conflict with Ridge Forrester (Thorsten Kaye) for a while now, but they truly don’t want to fight. They just have to find a way to get on the same page about Thomas Forrester (Matthew Atkinson).

Of course, Brooke and Ridge can’t agree about Thomas’ intentions or whether he’s still a threat. Both of them have made their opposing viewpoints crystal clear, and there’s probably no changing their minds. Even so, Ridge and Brooke are capable of finding common ground. They’ll focus on reaching some compromises in Friday’s B&B episode.

Ridge will take the lead on that by making a promise. It’ll be one that could prove hard to keep in the coming weeks. Since Brooke’s concerned about Douglas Forrester (Henry Joseph Samiri), maybe Ridge will vow to watch over the boy carefully. He might make guarantees about Thomas’ supervised visits with Douglas and how everything will go smoothly.

Ridge will end up busting Thomas alone with Douglas in the week ahead, so trouble’s brewing. There’s also a chance Ridge’s promise will involve honesty, which could lead to Shauna Fulton (Denise Richard) complications. Ridge will work hard to keep his night with Shauna a secret, but we all know things will explode sooner or later.