BY Heather Hughes on May 8, 2019 | Comments: one comment
Related : Soap Opera, Spoiler, Television, The Bold and the Beautiful 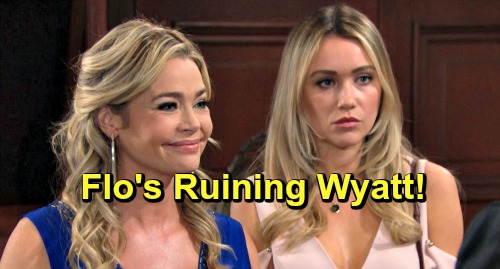 The Bold and the Beautiful (B&B) spoilers tease that Wyatt Spencer (Darin Brooks) and Sally Spectra’s (Courtney Hope) romance is on the verge of destruction. It’s a shame since Wyatt finally found a match who’s committed to him and wants to build a future together. Sally isn’t pining for another man and doesn’t have as much baggage that some of Wyatt’s old love interests had.

Wyatt will be furious after Sally comes clean about Thomas Forrester’s (Matthew Atkinson) plan. He’ll be appalled that Sally would keep something like this from him, but he’s one to talk! Wyatt’s been off kissing Flo repeatedly behind Sally’s back, so pot meet kettle. The Bold and the Beautiful spoilers say Wyatt won’t be able to get past Sally’s betrayal, but he’ll completely ignore his own.

Of course, it seems like Wyatt was just looking for an out here. It’s like he needed a reason to end things with Sally, so he may be glad this fell into his lap. This way Wyatt can put the blame on Sally and whine to Flo about the lack of trust. Unfortunately, Wyatt’s turning into someone who’s not very likable, which is strange since he’s normally one of the guys who’s easiest to root for.

With all this in mind, we have to ask…is Flo ruining Wyatt? Ever since Flo showed up in town, she’s been nothing but trouble. It doesn’t matter how much Flo talks about feeling guilty or how many times she almost comes clean. She’s still willing to look grieving Hope Spencer (Annika Noelle) – her own cousin – in the eye and deceive her about her “dead” daughter.

Now Flo’s presence in Los Angeles is destroying a perfectly happy couple that had some real chemistry. B&B fans like some love in the afternoon and “Wally” brought it. Flo also seems to be destroying Wyatt’s character. He’s finding ways to fault Sally and make her not measure up to the perfect woman he’s created in his head, which is apparently Flo – the one who got away.

Wyatt may end up regretting this drift toward lying Flo. She participated in Dr. Reese Buckingham’s (Wayne Brady) scheme, so she can be classified as a baby stealer. Flo’s robbing Hope of a life with Beth Spencer just as much as Reese did. If Wyatt thought Sally’s secret was infuriating, just wait until he learns what Flo’s hiding!