The Bold and the Beautiful Spoilers: Friday, July 12 Update – Sally Tricks Flo But Not Wyatt – Hope Pushed Into Quickie Marriage

BY Heather Hughes on July 12, 2019 | Comments: one comment
Related : Soap Opera, Spoiler, Television, The Bold and the Beautiful 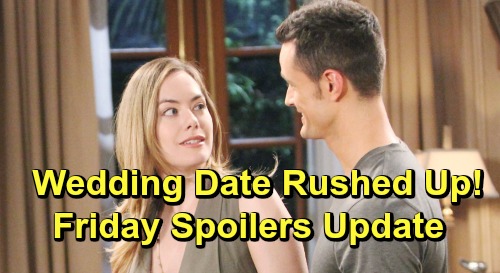 The Bold and the Beautiful (B&B) spoilers update for Friday, July 12, tease that Sally Spectra (Courtney Hope) will face a sight she’d rather not see. Wyatt Spencer (Darin Brooks) and Florence “Flo” Fulton (Katrina Bowden) will enjoy a make-out session at Forrester Creations, but Sally will want to gag. The last thing she needs is a front-row seat for kisses between the man she loves and his latest girlfriend.

Sally will resolve to get Flo out of the office, so she’ll write down a list of errands. She’ll feel confident this list will keep Flo away long enough to make her move with Wyatt. Once Sally and Wyatt are alone, perhaps some admissions will be made. Sally might point out that she’s been missing Wyatt lately. She’ll try to reel Wyatt back in and make him forget all about Flo – at least for a while.

Wyatt will indeed give Sally some attention, but Flo’s the one he wants now. Since Flo and Wyatt have rekindled their spark, Sally’s not going to get her reunion wish anytime soon. Wyatt might remind Sally that he’s moved on and urge her to do the same. Part of Wyatt certainly still cares for and is attracted to Sally, but he won’t be willing to throw away his blissful second chance with Flo.

Across town, Thomas Forrester (Matthew Atkinson) will take another step toward marrying Hope Logan (Annika Noelle). B&B fans know Hope recently agreed to Thomas’ proposal, but she’s dragging her feet on hitting the sheets. Thomas is eager to make love, so he’ll count on a rushed wedding to seal the deal.

Unfortunately, Douglas Forrester (Henry Joseph Samiri) will become part of a rotten trap on Friday. The Bold and the Beautiful spoilers say Thomas will prey on both Douglas and Hope’s emotions. It looks like Thomas will cause some concerns for his son. He might make Thomas believe that Hope won’t stick around if they can’t convince her to be his mommy immediately.

Thomas could remind Douglas of how sad he was to lose his biological mom, Caroline Forrester (Linsey Godfrey). He’s ruthless enough to make Douglas think Hope could leave him in the same way. Of course, Thomas could find another strategy to trigger a meltdown for Douglas. He could get sneaky to make Douglas upset and insist Hope’s the only one who can console him.

Thomas may urge Hope to see that she’s needed by Douglas’ side – tonight and every night. He’ll make Hope believe a rushed marriage is what’s best for Douglas, so she’ll grant his request and put Thomas on cloud nine. The Bold and the Beautiful spoilers say Thomas’ trickery will pay off for now, but his luck is bound to run out sooner or later!

The drama’s about to heat up, so don’t miss all the twists and turns ahead. We’ll give you updates as other B&B news comes in. Stay tuned to the CBS soap and don’t forget to check CDL often for the latest Bold and the Beautiful spoilers, updates and news.