BY hellodrdavis on July 25, 2019 | Comments: one comment
Related : Soap Opera, Spoiler, Television, The Bold and the Beautiful 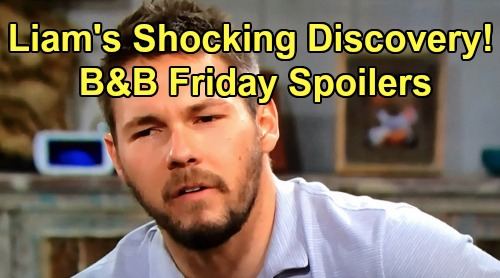 The Bold and the Beautiful spoilers for Friday, July 26, tease that Liam Spencer (Scott Clifton) will hope for the best as he continues his conversation on the phone with the Las Vegas hospital where Florence “Flo” Fulton (Katrina Bowden) allegedly gave birth to Phoebe Forrester (River Davidson and Madeline Valdez). As B&B viewers know, he’s just called the hospital to verify that Flo actually gave birth to a baby.

And as he did, Wyatt Spencer’s (Darin Brooks) words reiterated in his head. He remembered Wyatt saying that Flo had accidentally referenced “having a baby” as something that she had never done before and wanted to experience in the future. That sounds awfully suspicious to Liam, and he is clearly thinking that the worst could be possible…that Flo never gave birth to Phoebe.

The Bold and the Beautiful spoilers reveal that Liam will keep digging and pulling back the layers on the big mystery here. Although he tried to contain his reaction so as not to worry Steffy Forrester (Jacqueline MacInnes Wood) about the situation, it was clear that Liam was seriously worried when he learned that it was an anonymous colleague of Taylor Hayes (Hunter Tylo) who put Steffy in contact with Flo.

Liam’s certainly on the verge of discovering something big, as he seems determined to find out who this mystery colleague is, who must be someone who Flo knows in Los Angeles. Of course, B&B viewers know that this person is none other than Reese Buckingham (Wayne Brady), who is long gone from Los Angeles and currently residing out of the country.

Of course, once it comes out about Reese being the link between Flo and Taylor, Liam will probably put two and two together pretty quickly, since Reese is also the doctor who delivered Beth Spencer on Catalina Island. But for now, we’ll see how far Liam gets in gathering information on Friday’s episode. He’s hoping for some crucial detail from the Las Vegas hospital.

Meanwhile, on Friday’s new episode of The Bold and the Beautiful, Flo will be feeling completely overwhelmed. She’ll catch up again with Zoe Buckingham (Kiara Barnes) and the two will have words. Of course, the last these two talked was before a drunken Flo was headed to Thomas Forrester (Matthew Atkinson) and Hope Forrester’s (Annika Noelle) wedding with the intention of telling Hope all the details about Beth being alive.

Zoe will surely be relieved to learn from Flo that she in fact didn’t spill the beans. Flo will share how Thomas essentially threatened her life if she told Hope or anyone else the truth. Of course, Thomas didn’t actually come out and say that he’d kill her, but his words about “taking the secret to your grave” made it clear what he meant.

Look for another argument between Zoe and Flo on Friday’s episode, with Flo lamenting about how the truth must come out and Zoe essentially siding with Thomas on how the secret must be kept, even though she doesn’t approve of his tactics and threats. Flo will certainly be feeling the pressure from all sides.