BY Heather Hughes on July 26, 2019 | Comments: one comment
Related : Soap Opera, Spoiler, Television, The Bold and the Beautiful 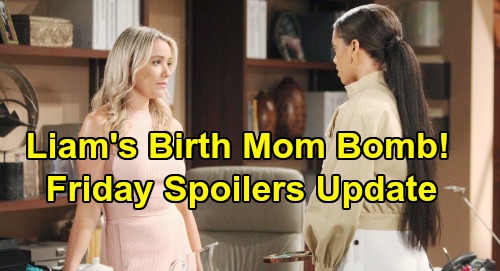 The Bold and the Beautiful (B&B) spoilers update for Friday, July 26, tease that Florence “Flo” Fulton (Katrina Bowden) will be rattled by Thomas Forrester’s (Matthew Atkinson) dark side. He seems to get more menacing every day. Thomas was downright nasty to poor little Douglas Forrester (Henry Joseph Samiri), who overheard his daddy saying that Beth Spencer is alive.

Douglas may face another round of harsh treatment in the coming episodes, but let’s focus on Flo for now. She’ll be in panic mode as she tells Zoe Buckingham (Kiara Barnes) about Thomas’ death threat. Once Flo explains that she fears for her life, Zoe might argue that she’s overreacting. She may suggest that Thomas wouldn’t actually murder Flo for blabbing, but she still won’t want her to do it.

Flo may remind Zoe that one of their fellow secret-keepers is as dead as a doornail. Emma Barber (Nia Sioux) didn’t make it out of this mess alive, so Flo will worry that she won’t either. Of course, Zoe will likely note that there’s no firm proof Emma’s death was murder. Thomas was indeed at the accident site, but only Thomas and Emma know for sure what happened before the crash.

However, Thomas is clearly going berserk. If Emma hadn’t lost control of her vehicle, Thomas might’ve taken her out another way. He certainly seems like a man who’s capable of full-blown murder at this point. We wouldn’t put it past Thomas to form a deadly plot against Flo, and she wouldn’t put it past him either!

The Bold and the Beautiful spoilers say Flo will have a freak-out, but Zoe will urge her to just keep her mouth shut. As long she Flo does that, Zoe won’t think there’s anything to worry about either way. Meanwhile, Liam Spencer (Scott Clifton) will await the confirmation he needs. He’s counting on the hospital to reveal if Flo was really a patient when she claims to have given birth.

B&B fans know Flo isn’t really “Phoebe Forrester’s” (River Davidson and Madeline Valdez) birth mom. Liam’s on the verge of proving it, so an emotional admission is looming from Flo next week. Until then, Liam will put more puzzle pieces together and hope he can see the big picture. He doesn’t like the truth that’s coming into focus, but he’s determined to find it anyway.