The Bold and the Beautiful Spoilers: Steffy Fights for Custody After Big Reveal – Insists Hope Is Unstable, Can’t Be Beth’s Mom 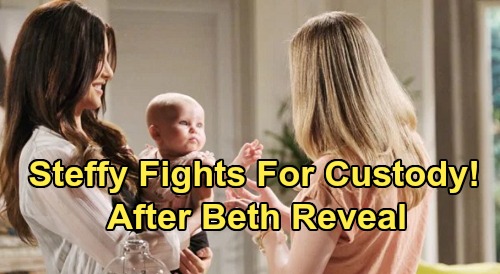 The Bold and the Beautiful (B&B) spoilers tease that Liam Spencer’s (Scott Clifton) digging is the first step toward the big reveal. We’ve still got some hoops to jump through and some shockers left to play out, but we’re getting closer to Hope Forrester’s (Annika Noelle) reunion with her daughter. Once Liam learns Florence “Flo” Fulton (Katrina Bowden) was never pregnant and gets her to admit it, they can focus on figuring out this baby’s true identity.

Dr. Jordan Armstrong (Vincent Irizarry) will be a key player in the final phase of the big reveal, which will prove “Phoebe Forrester” (River Davidson and Madeline Valdez) is actually Beth Spencer.

Of course, the truth is going to floor Hope and Steffy Forrester (Jacqueline MacInnes Wood). It could kick off a war between the only mother Beth has ever known and her true mom, who so desperately wants her back.

Steffy Forrester May Insist On Transition Plan For Baby Phoebe

However, it probably won’t be as simple as Hope barging in and reclaiming her kid. Steffy will naturally worry about Hope ripping “Phoebe” away from her adoptive mom and the environment she’s familiar with. She may feel like they need some sort of transition plan, especially since “Phoebe’s” used to living with her sister, Kelly Spencer (Zoe Pennington). There are a lot of factors to consider here.

Even so, B&B spoilers say Hope will be a mess of emotion and rage by then. We have to put ourselves in Hope’s shoes here. This is a woman who’s been deeply distraught for months, and she’s about to find out several people had the power to stop her pain. Those people stood by and did nothing. Hope’s own cousin and new husband are guilty of letting her suffer!

Flo and Thomas Forrester (Matthew Atkinson) will definitely face Hope’s wrath along with the other secret circle members. Naturally, it’s easy to imagine Hope blaming Steffy as well. She’ll be so furious over the situation that she won’t be thinking straight. Steffy may have been in the dark, but Hope may think it’s because Steffy ignored the shady details of the adoption and let this happen.

Hope Logan Will Not Be Concerned With Steffy Forrester’s Feelings

The Bold and the Beautiful spoilers say Hope will less concerned about Steffy’s feelings and more concerned about getting her baby back. If Hope comes somewhat unhinged during all of this, it’d be simple for Steffy to argue Hope’s unstable. She could back it up with Hope’s sudden annulment to Liam and rushed marriage to crazy Thomas. Any particularly wild outbursts might also count against Hope.

Steffy may be able to point to a pattern and keep custody of Beth for a while. As someone who loves this little girl very much, we’d get why Steffy would be desperate to hold onto her – especially if she genuinely believes Hope’s out of control. The Bold and the Beautiful spoilers say the show may be laying the groundwork for a fierce custody battle.

Do you think Steffy will fight for Beth? Will she try to argue Hope’s unstable and an unfit parent? We’ll give you updates as other B&B news comes in. Stay tuned to the CBS soap and don’t forget to check CDL often for the latest Bold and the Beautiful spoilers, updates and news.