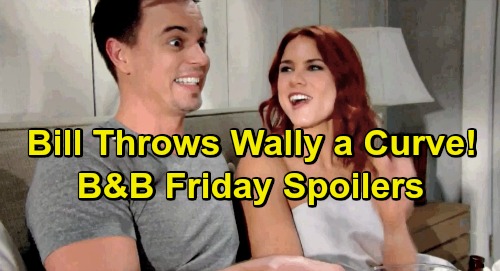 The Bold and the Beautiful spoilers for Friday, March 1, tease that Zoe Buckingham (Kiara Barnes) will get a big surprise. She’ll take an outing to Bikini Bar and notice that Florence “Flo” Fulton (Katrina Bowden) is now working at the establishment. This will shock Zoe, who naturally assumed that Flo would be returning to Las Vegas rather than staying in Los Angeles permanently.

Zoe figured that Flo would vanish, much like her father Reese Buckingham (Wayne Brady) vanished from the Los Angeles scene. But there Flo will be, working right out in the open at Bikini Bar. Zoe will freak out, since Flo is supposed to be long gone. Now that Zoe has resigned herself to keeping her dad’s secret about the baby swap, she doesn’t want Flo to ruin things by spilling the beans to the wrong person.

Zoe will confront Flo and call her out on saying in Los Angeles, but Flo will probably defend herself, saying that her plans are her own business. Zoe will likely disagree, arguing that Flo needs to get as far away from Steffy Forrester (Jacqueline MacInnes Wood) and Phoebe Forrester (Isabella de Armas and Redford Prindiville) as possible.

We’ll see how Flo responds to that, and at any rate it doesn’t look like she’s going to leave town anytime soon. Rather, she’ll find herself mingling with former love Wyatt Spencer (Darin Brooks) and meeting Hope Spencer (Annika Noelle) soon enough.

Meanwhile, on the new episode of B&B on Friday, March 1, Wyatt and Sally Spectra (Courtney Hope) will get a surprise of their own. It looks like they’ll meet with Bill Spencer (Don Diamont) about the terms of their employment with Spencer Publications, and it will be time to iron out the details regarding the Spectra Fashions revival.

Sally and Wyatt will be all psyched up for the meeting, but Bill will have some ideas that will throw a wrench into Sally’s Spectra plans. B&B spoilers say that Bill will throw Wyatt and Sally a curve ball of some sort. What could it be?

Bill may have some specific demands that Sally’s not so crazy about at first. It doesn’t look like Bill will be malicious in any of his demands, though. After all, he’s the new and improved Bill Spencer! But he may have some ideas that Sally hadn’t anticipated, and she may have to get used to the idea that she’s in a partnership and not totally running the show.