The Bold and the Beautiful Spoilers: Friday, May 17 Update – Zoe Panics, Fears Flo’s Going to Blow – Will Gets Big Batie News

BY Heather Hughes on May 17, 2019 | Comments: one comment
Related : Soap Opera, Spoiler, Television, The Bold and the Beautiful 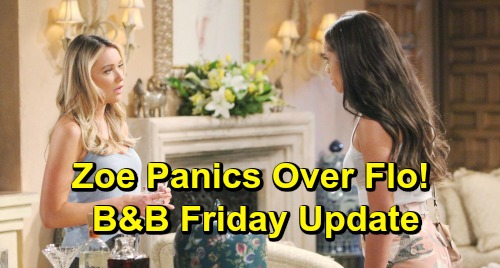 The Bold and the Beautiful (B&B) spoilers update for Friday, May 17, tease that Florence “Flo” Fulton (Katrina Bowden) will get cornered by Zoe Buckingham (Kiara Barnes). B&B fans know Flo’s had a hard time keeping her mouth shut. She’s managed to do it so far, but she’s had several close calls along the way.

As a result, Zoe will remain concerned about the threat Flo poses. She won’t want the truth about Beth Spencer getting out, so she’ll check in with Flo to make sure their secret is safe. Of course, some recent developments will leave Zoe even more fearful. Flo is moving in the Forrester mansion with Shauna Fulton (Denise Richards), so that’s obviously not news that Zoe will appreciate.

However, Zoe will be most worried about Flo’s growing bond with Hope Spencer (Annika Noelle). Since Flo is working with Hope on a daily basis, that can only spell trouble. Hope feels drawn to Flo and finds her easy to open up to. That only adds to Flo’s guilt, so Zoe will feel like her fellow secret-keeper is overcomplicating this. She’ll insist Flo’s making their web of lies harder, so she’ll want it to stop.

Zoe will urge Flo to quit piling on unnecessary risks. She’ll think Flo should keep her distance from Hope as much as she can. Unfortunately, that’s impossible since they have the same place of employment and the same family. Flo has been welcomed to the Logan clan with open arms, so there’s no way they’ll let her cut them off.

As for Flo’s budding romance, that could leave Zoe torn. It’s a gamble for Flo to date Wyatt Spencer (Darin Brooks), but it also provides an incentive to stay quiet. The Bold and the Beautiful spoilers say Zoe will eventually offer an emotional plea. She’ll ditch the warnings and opt for full-on begging to keep Flo’s mouth shut.

Over with Will Spencer (Finnegan George), he’ll get some terrific updates from his parents. Katie Logan (Heather Tom) was deeply moved when Bill Spencer (Don Diamont) shut down Shauna’s seduction. Now that Bill has proven his loyalty, Katie’s ready to be a united family again. She’ll join Bill in telling Will about their impending remarriage.