The Bold and the Beautiful Spoilers: B&B Deaths Leaked – See Which Characters Are Killed Off

BY Heather Hughes on May 16, 2019 | Comments: 3 comments
Related : Soap Opera, Spoiler, Television, The Bold and the Beautiful 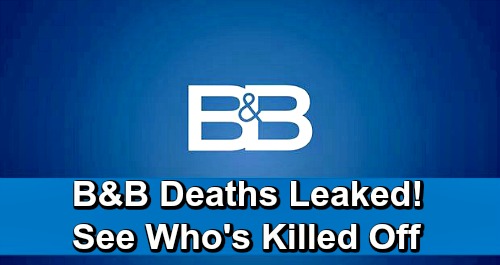 The Bold and the Beautiful (B&B) spoilers tease that as the baby switch story heats up, not every character will make it out alive! B&B has a handful of secret-keepers and will gain more as time goes on. However, some of them won’t get a chance to come clean. In fact, one or more may be targeted because of what they know.

Bradley Bell, The Bold and the Beautiful’s head writer and executive producer, hinted at some deadly outcomes in a recent interview with Michael Fairman. He talked about villains emerging and insisted “we’re going to have people dying,” so it doesn’t get any clearer than that. In that comment, Bell confirmed there would be multiple deaths. People means at least two, but there could be more.

Let’s talk about some likely fatalities based on what we know and who’s dispensable. For starters, there’s Xander Avant (Adain Bradley). He’s on the verge of finding out what Zoe Buckingham (Kiara Barnes) is hiding. Unlike Zoe and the others in her secret circle, Xander may plan to tell the truth. He might serve as the voice of reason and declare that this ends now.

Xander is likable, so it’s not exactly bothersome to have him around. However, is he really anyone’s favorite? Does Xander add much of anything to the canvas? This character feels unnecessary, so he might be a good one to ax.

We could get an emotional punch since Xander is Maya Avant’s (Karla Mosley) cousin and Zoe Buckingham’s (Kiara Barnes) boyfriend, but we wouldn’t have to watch major mourning. That’s the ideal death if you ask us. Shauna Fulton (Denise Richards) isn’t off her rocker, but she could go there if need be. She seems like the kind of gal who does whatever she has to do – even if it’s violent.

The Bold and the Beautiful spoilers say Zoe could also be at risk. Her death would add an interesting layer of drama. It’s easy to imagine Dr. Reese Buckingham (Wayne Brady) being so overcome with emotion that he felt the need to confess. Losing a daughter could make Reese determined to give Hope Spencer (Annika Noelle) her own daughter back.

Of course, that could put Reese in danger himself! Wayne Brady has already conquered his mission to appear on The Bold and the Beautiful, so maybe they’ll write Reese out permanently. Could he try to confess and lose his life?

Denise Richards was also a pretty big name for B&B to get. If she has other projects to tackle down the road, killing Shauna off would be an easy exit. Florence “Flo” Fulton (Katrina Bowden) is probably the least likely option, but we can’t rule her out either. It’s wise to keep an eye on all secret club members and anyone else who might join.

Based on Bell’s statement, at least a couple of these characters should die at some point. The Bold and the Beautiful spoilers say the show may use this as a shocking obstacle. Just before “Phoebe Forrester” (Isabella de Armas and Rosalind Aune) is revealed as Beth Spencer, death could strike!