The Bold and the Beautiful Spoilers: Week of May 20 – Wyatt Crushes Sally, Reveals He’s Moving on with Flo

BY Heather Hughes on May 16, 2019 | Comments: one comment
Related : Soap Opera, Spoiler, Television, The Bold and the Beautiful 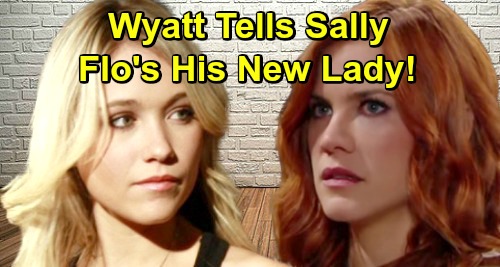 The Bold and the Beautiful (B&B) spoilers tease that Wyatt Spencer (Darin Brooks) will decide it’s time to have another talk with Sally Spectra (Courtney Hope). After their recent fight over Sally’s secret-keeping, things really fell apart. Sally ultimately decided it’d be best if she moved out, so she packed up her stuff and left.

It’s clear that Sally’s remorseful over hiding the truth about Thomas Forrester’s (Matthew Atkinson) plan. She loves Wyatt and never intended to hurt him. We can understand Wyatt’s frustration, but he might be taking it to the extreme. In fact, Wyatt is probably just using this as the out he needed.

From the moment Wyatt saw Florence “Flo” Fulton (Katrina Bowden) again, a familiar spark returned. Wyatt has been drawn to his high school sweetheart, so he may be blowing this whole Thomas thing out of proportion for a reason. Maybe Wyatt is convincing himself this is a deal-breaker because he really wants Flo instead.

During the week of May 20-24, The Bold and the Beautiful spoilers say Wyatt and Sally will have a difficult heart-to-heart. Will Wyatt admit there’s more to the story? It’d be nice if Wyatt could take at least a little of the blame off Sally. She feels terrible about keeping secrets from Wyatt and making him feel betrayed. Since that’s clearly not the only reason Wyatt’s pulling away, Sally deserves to know that.

After all, Wyatt already has a date with Flo! How tacky is that? He’s kissed Flo multiple times behind Sally’s back, so it’s not like Wyatt’s completely innocent here. Of course, there’s a chance Wyatt will continue to guilt-trip Sally during this conversation. If he does, Sally deserves better. Wyatt shouldn’t be making her feel like scum just because he wants to reunite with lying Flo.

Whatever the case, The Bold and the Beautiful spoilers say this tough chat will move them forward separately. Wyatt and Sally will see that it’s truly over between them. Perhaps Wyatt will confess he’s planning to date Flo instead. That should cut deep for Sally, but she’ll likely throw herself into work and hopefully heal her broken heart soon.