BY Heather Hughes on May 16, 2019 | Comments: 2 comments
Related : Soap Opera, Spoiler, Television, The Bold and the Beautiful 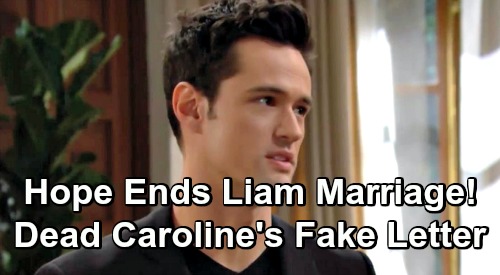 The Bold and the Beautiful (B&B) spoilers tease that Thomas Forrester (Matthew Atkinson) will kick things up a notch. Now that Liam Spencer (Scott Clifton) is back in town, Thomas knows his fight will be tougher. He desperately wants to reunite with Hope Spencer (Annika Noelle), so he’ll take drastic action to make it happen. Thomas will prove there’s no line he won’t cross if it’ll get the desired outcome.

B&B fans know Thomas has been using Douglas Forrester (Henry Joseph Samiri) as a pawn in his game. As if that wasn’t disgusting enough, Thomas will use his son’s dead mother next. During the week of May 20-24, The Bold and the Beautiful spoilers say Thomas will disrespect Caroline Spencer’s (Linsey Godfrey) memory. Based on some other new info, we think we know where this is headed.

Hope will be given a letter that was supposedly written before Caroline’s death. There’s no word yet on how the letter will end up in Hope’s hands, but this certainly sounds like a scam. Thomas may disguise his scheme by having the letter sent to Hope. It’d be suspicious if he offered it himself, so he might explore other options that won’t raise red flags.

If Thomas was willing to make a fake drawing from Douglas, he’d be willing to provide a fake letter from Caroline. We wouldn’t put that past Thomas at all. Since we know Thomas will use Caroline in the week ahead, May 20-24, and the letter will arrive that same week, it makes sense that these puzzle pieces fit. Thomas will likely forge a letter from his ex, which is sure to nudge Hope in his direction.

The Bold and the Beautiful spoilers say Hope will be moved to tears by Caroline’s sweet note – or what she believes is Caroline’s sweet note. This letter should back up Thomas’ claims that if anything happened to Caroline, she wanted Hope to raise Douglas. It’ll likely spell out that Hope is the perfect replacement.

Thomas may even throw in some lines about Hope and Thomas being the ideal match. Perhaps he’ll make “Caroline” suggest that their relationship failed because he still loved Hope. The day after Hope reads this letter, her marriage to Liam will completely fall apart. It won’t be the sole reason why, but it’s safe to say it’ll be what pushes Hope over the edge.