The Bold and the Beautiful Spoilers: Bradley Bell Leaks Shocking B&B Deaths – Baby Beth Secret-Keepers Take It to the Grave

BY Heather Hughes on May 15, 2019 | Comments: 7 comments
Related : Soap Opera, Spoiler, Television, The Bold and the Beautiful 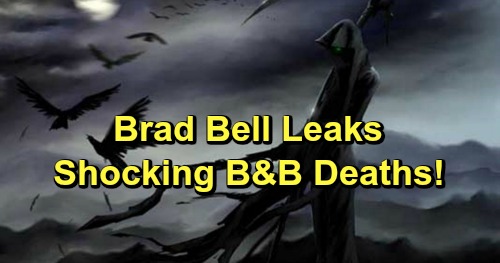 The Bold and the Beautiful (B&B) spoilers tease that more shockers are ahead on the CBS soap. In a recent interview with Michael Fairman, B&B Head Writer and Executive Producer Bradley Bell offered some great hints. He has huge plans for the daytime drama, so B&B fans will be eager to see all the surprises and shakeups.

Bell had some bad news for anyone hoping for a quick and easy baby swap wrap-up. Storylines like these are always lengthy, and this one is no different. “This is a secret that will be held for a good amount of time,” Bell said. However, he added that “the secrets that are held the longest are the best when they come out.” B&B fans’ patience will definitely be rewarded with an explosive big reveal.

Of course, there’ll be plenty of chaos keep us entertained in the meantime. The Bold and the Beautiful spoilers say Thomas Forrester (Matthew Atkinson) will remain “up to no good” according to Bell. His scheming will rev up, so we’ll see just how low Thomas is willing to go.

Thomas could be becoming more of a villainous character. Bell dropped a hint about some of those in his interview. Could Shauna Fulton (Denise Richards) take a dark turn, too? She’s clearly becoming obsessed with the cushy life that’s been given to Florence “Flo” Fulton (Katrina Bowden).

Shauna’s glad to be connected to her daughter right about now, especially since they’re moving in the Forrester mansion. She’ll keep urging Flo to milk her Logan status for all its worth! Nevertheless, the biggest bomb to drop in this interview was one about character deaths.

Bell talked about the future of The Bold and the Beautiful, which he hopes will delight viewers. That’s when he made a comment about some characters getting killed off. “We’ve got all the great elements,” Bell said. “We’ve got a great romance, we have villains emerging, we’re going to have people dying, we’re going to have everything that you need. All the components for a great show.”

Notice Bell said “people dying” and not “someone will die.” People is plural, so it sounds like there’ll be more than one person who takes this baby swap secret to the grave. Who’s at risk here? Zoe Buckingham (Kiara Barnes) is certainly someone to consider. Xander Avant (Adain Bradley) could also find himself in danger if he learns the truth and threatens to expose it.