The Bold and the Beautiful Spoilers: Friday, May 24 – Hope Holds Phoebe In Her Arms Once Again – Brooke & Ridge Clash

BY hellodrdavis on May 23, 2019 | Comments: one comment
Related : Soap Opera, Spoiler, Television, The Bold and the Beautiful 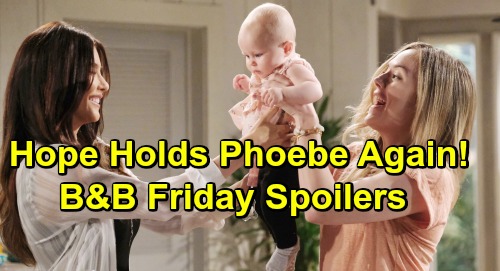 The Bold and the Beautiful spoilers for Friday, May 24, tease that Hope Spencer (Annika Noelle) will pay Steffy Forrester (Jacqueline MacInnes Wood) a visit at the cliff house. Steffy’s just returned from Paris with Kelly Spencer (Zoe Pennington and Chloe Teperman) and Phoebe Forrester (Madeline Valdez), and Hope will be anxious to see them all again.

Of course, Liam Spencer (Scott Clifton) has already been to visit Steffy, and so Steffy knows that he and Hope have agreed to end their marriage. Steffy will probably be surprised that Hope would want to come by given the circumstances, but Hope will be enthusiastic to visit, and in particular to see Phoebe again.

As B&B viewers know, Hope missed Phoebe like crazy while Steffy and the girls were in Paris. Hope just can’t shake the deep connection that she feels toward Phoebe, and for now she’s chalking it up to Phoebe being a Logan by birth. As she finally holds Phoebe in her arms again, she’ll feel complete and happy once again.

Meanwhile, on the new episode of B&B on Friday, May 24, Ridge Forrester (Thorsten Kaye) will have some shocking words for Brooke Forrester (Katherine Kelly Lang). Brooke has just learned that Liam and Hope are ending their marriage, and she’ll share the news with Ridge. Of course, Brooke is torn up about the news, as she was “Lope’s” biggest supporter.

Brooke will lean on her husband for support, but she’ll be surprised when he expresses his true feelings on the matter. As B&B viewers know, from the beginning of the Steffy/Liam/Hope love triangle, Ridge wanted Steffy and Liam to be together. He eventually put those feelings aside and came to respect Hope and Liam’s marriage, but he may be still hoping that Steffy and Liam will join together again.

Ridge may voice how he understands Hope’s feelings and her gravitation toward being a mother-figure to Douglas Forrester (Henry Joseph Samiri). Of course, Ridge isn’t pleased with his son Thomas Forrester’s (Matthew Atkinson) blatant desire for Hope, but he may indicate that he understands how Hope could feel pulled toward Thomas and Douglas.

That won’t sit well with Brooke, who will obviously disagree with Ridge. Brooke wants nothing more than for Hope to remain with Liam, but that’s just not meant to be at this point. Hopefully, Brooke and Ridge will maintain their vow to stay out of their children’s lives and let Hope, Liam, Steffy, and Thomas figure out how things will be going forward.