The Bold and the Beautiful Spoilers: B&B Fans Fed Up with Wyatt – Sally Deserves Better – Rude Awakening with Lying Flo

BY Kinsley Goldman on May 23, 2019 | Comments: 2 comments
Related : Soap Opera, Spoiler, Television, The Bold and the Beautiful 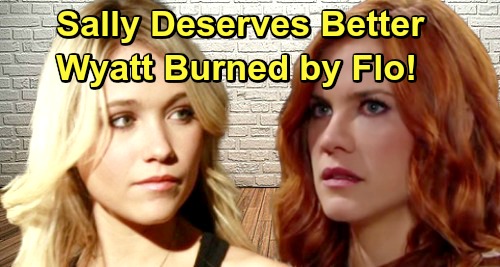 The Bold and the Beautiful (B&B) spoilers reveal that one character is facing some backlash from social media right now. Actually, make that several characters, but there’s one we want to talk about right now! Wyatt Spencer (Darin Brooks) was once the Spencer brother we could count on. He wasn’t the waffler like Liam Spencer (Scott Clifton), but the torch has been passed.

Wyatt was deeply in love with Sally Spectra (Courtney Hope) before Florence “Flo” Fulton) walked back into his life. They shared multiple kisses behind Sally’s back, but somehow Wyatt seems to think Sally’s the one who did him dirty. Granted, Sally did bail on the deal Wyatt cooked up for her with Bill Spencer (Don Diamont). However, Sally was just doing what was best for her career and her future.

Shouldn’t Wyatt want to support the most successful path for Sally? His pride was the real issue if you ask us. Of course, Sally also briefly kept quiet about Thomas Forrester’s (Matthew Atkinson) plan to reunite with Hope Spencer (Annika Noelle). She’s taken responsibility for that and knows she hurt Wyatt by keeping the secret from him.

The problem is during his last chat with his brother, Wyatt actually seemed supportive of Liam and Steffy Forrester (Jacqueline MacInnes Wood) being a family with the girls. What was with all the outrage over Sally’s actions when Wyatt can get behind a “Steam” reunion?

Keeping secrets from your significant other is never a good idea, but as we mentioned – Wyatt has been doing the exact same thing to Sally. Many B&B viewers are growing frustrated with Wyatt’s blame game. It’s clear that Wyatt wanted to be with Flo and used Sally’s minor betrayal as a way out of the relationship. As a result, The Bold and the Beautiful fans have been weighing in on Twitter.

“I hate that Sally is taking responsibility for letting Wyatt down while he was just looking for an excuse to go to Flo,” one fan said. “Sally, baby..its not all on you..there are things Wyatt will never tell you cause he has to feel good about betraying you,” said another. One more marveled, “It’s beyond me how the writers always make Wyatt to be the good guy and Sally the bad one.”

The Bold and the Beautiful spoilers say Wyatt will move on with lying Flo, but he’s in for a rude awakening down the road. His honest high school sweetheart isn’t being so honest after all, so that baby swap shocker’s sure to hit him like a freight train.

Are you fed up with how Wyatt’s been acting lately? Will it serve him right when he learns Flo’s a far worse liar than Sally? We’ll give you updates as other B&B news comes in. Stay tuned to the CBS soap and don’t forget to check CDL often for the latest Bold and the Beautiful spoilers, updates and news.