The Bold and the Beautiful Spoilers: Tuesday, May 7 Update – Liam Rushes Home After Wyatt Exposes Thomas’ Scheme – Sally Moves Out

BY Heather Hughes on May 7, 2019 | Comments: one comment
Related : Soap Opera, Spoiler, Television, The Bold and the Beautiful 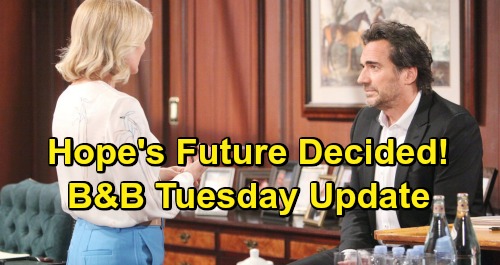 The Bold and the Beautiful (B&B) spoilers for Tuesday, May 7, tease that Brooke Forrester (Katherine Kelly Lang) will be riled up. She won’t approve when Ridge Forrester (Thorsten Kaye) mentions his son’s interest in Hope Spencer (Annika Noelle). Ridge will admit Thomas Forrester (Matthew Atkinson) never got over Hope, but Brooke will insist anything beyond friendship is unacceptable.

Hope is married to Liam Spencer (Scott Clifton), so Brooke will refuse to let Thomas mess with their relationship. She’ll make that crystal clear to Ridge, but he’ll hint that Thomas might have the right idea. Ridge won’t think it’d be such a bad thing if Liam and Steffy Forrester (Jacqueline MacInnes Wood) were together with the girls. He won’t see what’s so wrong about two full-time parents in the home.

Brooke will be stunned at what Ridge is suggesting. She’ll wonder if he’s really OK with Thomas going after Hope and trying to sabotage her marriage. However, Ridge won’t be advocating for that exactly. He’ll just think they should butt out and let their kids handle their own love lives.

While Ridge and Brooke debate the situation, Thomas will continue his pitch. He showed Hope the engagement ring he kept from Cabo, so he’ll keep laying it on thick. Thomas will feel like he’s the only one who can give Hope a real commitment, but she won’t agree. Hope will contend that Liam’s flip-flopping days are behind him.

Nevertheless, Thomas will believe they’re each other’s destiny. He’ll promise Hope that he loves her and only her, so he’ll be waiting to put that ring on her finger. Thomas will assure Hope that it’ll be there when she’s ready.

The Bold and the Beautiful spoilers say Hope will dismiss the notion and leave, but she’ll change her mind in Thomas’ hot fantasy. He’ll imagine Hope has returned to make his dreams come true. In this fake interaction, Hope will declare that she wants to be in Thomas’ life, too. She’ll kiss him passionately before Thomas snaps back to reality.

Across town, Sally Spectra (Courtney Hope) will realize too much damage has been done. She broke the trust Wyatt Spencer (Darin Brooks) had in her and she’ll be truly sorry for that. Sally will eventually decide it’d be best to move out. She’ll tell Wyatt she still loves him, but she won’t want to stick around and make things worse.

Afterward, Wyatt will phone Liam with shocking news. He’ll fill his brother in on Thomas’ plan and insist that Liam has to come home NOW. B&B spoilers say Liam will promise he’s on his way. He’ll vow to catch the first flight out of Paris, so it won’t be long until Thomas gets an earful!

It sounds like some excellent scenes are coming up. The Bold and the Beautiful spoilers state that Thomas’ actions will cause even more drama, so don’t miss all the chaos. We’ll give you update as other B&B details emerge. Stay tuned to the CBS soap and don’t forget to check CDL often for the latest Bold and the Beautiful spoilers, updates, and news.