Daytime Emmy Awards 2019 Scandals – Who Got Cheated – Was the Judging Fair?

BY Sandra McIntyre on May 6, 2019 | Comments: 2 comments
Related : Days of Our Lives, General Hospital, Soap Opera, Spoiler, Television, The Bold and the Beautiful, The Young and the Restless 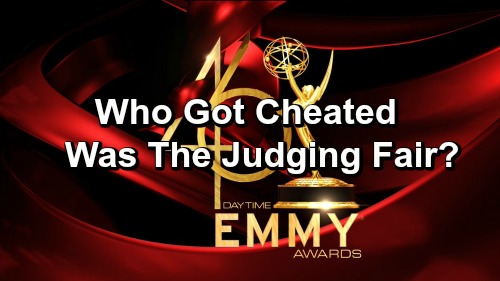 The Daytime Emmy Awards have been around for 46 years, and the judging has sometimes made us question what they were thinking. Of course, this year is no different. Many viewers were more annoyed than ever because we were denied the opportunity to see the submitted Emmy reels. With fans having no say in these awards, are they truly fair?

The award for outstanding drama series was taken home by The Young and The Restless. Their episode submissions were stellar, so it’s tough to deny they deserve this award. This win should also boost the morale of the cast and crew after the untimely death of Kristoff St. John, who played Neil Winters on Y&R. When the number-one rated daytime drama wins the top prize, we can’t argue with that.

In the outstanding actor category, Maurice Benard (Sonny Corinthos on GH) was given the honor. He’s been fantastic in GH’s Alzheimer’s storyline, but what about Jon Lindstrom as Dr. Kevin Collins and Ryan Chamberlain? Lindstrom’s dual role deserved a win as well, so it’s a shame this one didn’t end in a tie.

Still, it was nice seeing Benard so moved by his victory. He didn’t prepare a speech because he expected someone else to win and that made his win even more special.

As for outstanding lead actress, that award went to Jacqueline MacInnes Wood (Steffy Forrester, B&B). Wood’s performance was solid or else she wouldn’t have been nominated, but it was truly shocking that Maura West (Ava Jerome, GH) didn’t win.

West is a powerhouse daily, but the breakdown she delivered over Kiki Jerome’s (Hayley Erin) dead body seemed impossible to beat. Not hearing West’s name announced was one of the most surprising moments of the night. This category probably makes fans wish they could vote in these awards!

Max Gail’s portrayal of General Hospital’s Mike Corbin won him the Daytime Emmy for outstanding supporting actor. Gail definitely deserved to take home that statuette. He’s been phenomenal in showing us the slow, painful decline of an Alzheimer’s patient. Gail is amazing and will hopefully receive even more recognition for his brilliant work.

In the outstanding supporting actress category, Vernee Watson won for her role as GH’s Stella Henry. She put Stella’s anger on full display in her 2018 scenes, which brought some fierce performances. However, many soap fans predicted Mishael Morgan (Hilary Hamilton, Y&R) would walk away with a win here. It’s usually difficult to beat a deathbed exit story, so Watson’s victory was another surprise.

Kyler Pettis (Theo Carver, Days of Our Lives) won the outstanding younger actor award, and it was great to see Days score at least one acting win. Pettis delivered a fantastic performance in a gripping shooting storyline, but GH’s Garren Stitt also deserved a statuette. He was very believable as a dying Oscar Nero, so a tie would’ve been awesome to see in this category.

In the outstanding younger actress group, Hayley Erin (Kiki Jerome, GH) certainly deserved the win for her “Me Too” movement material. She played the role superbly up until Kiki’s tragic death, so can’t argue with her win. Chloe Lanier (Nelle Benson, GH) was another strong candidate, but we can understand why Erin might’ve edged her out in the end.

What did you think about the Daytime Emmys this year? Were you pleased or disappointed? Do you wish loyal fans had a chance to vote on these awards? We’ll give you updates as other soap news comes in. Stay tuned to all your favorite daytime dramas and don’t forget to check CDL often for the latest soap spoilers, updates and news.