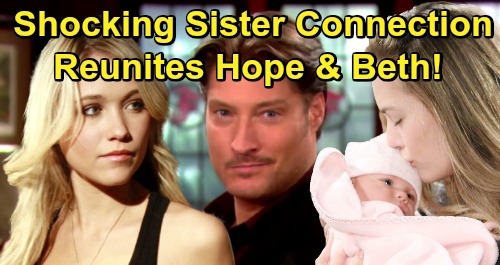 The Bold and the Beautiful (B&B) spoilers tease that Florence “Flo” Fulton (Katrina Bowden) may have one more connection on canvas. It that turns out to be the case, it’ll be one she doesn’t even know about yet. Let’s consider some crucial clues the show recently offered.

For starters, B&B fans know Flo’s been bonding with Hope Spencer (Annika Noelle). Flo’s guilt is the driving force, but there may be more under the surface. The two women seem to have a real connection.

Wyatt Spencer (Darin Brooks) talked to Liam Spencer (Scott Clifton) and Sally Spectra (Courtney Hope) about how kind and generous Flo is. They discussed how Hope has those same qualities as well. Liam, Wyatt and Sally are glad that the ladies can relate to each other.

Of course, Flo’s keeping a major secret and will stir up more suspicions eventually. She’s keeping the truth about Beth Spencer under wraps, so she’s no saint. However, B&B seems to be working the similarity angle for now. Flo is battling serious guilt, which says a lot about her character. That tells us she’s a good person who got mixed up in a bad scheme.

Even Flo’s guilt could tie in with Hope. After all, Hope felt guilty over not being awake for Beth’s birth. The Bold and the Beautiful spoilers state that B&B may be laying the groundwork for another surprising link. There’s another hint that points in this intriguing direction.

Hope was amazed that Flo could show so much concern for a stranger, but Flo argued that Hope didn’t feel like a stranger to her. That led Hope to admit she felt she knew Flo, too. The Bold and the Beautiful could be giving us a hint that there’s a deeper connection here. Perhaps it’s far more than just a fake birth mom and real birth mom bonding.

It makes sense that Flo and Hope might be long-lost sisters. We know that Flo’s mother, Shauna Fulton, will show up in April with secrets from her past. A fling with Deacon Sharpe (Sean Kanan) could be one of those secrets. If Flo finds out Hope is her half-sibling, it would raise the stakes.

There could be another story-related reason for this twist. Maybe someone will grow curious and run a DNA test down the road. Wyatt, Liam or even Sally might get suspicious enough to see if Flo is really Beth’s birth mother.

If Flo and Hope are sisters, the test results could be a bit murky. Flo might skate by as long as she’s somewhat of a match. After all, no one would suspect Flo and Hope were related! As a bonus, it might spark Deacon’s comeback at some point. Flo learning that she is Hope’s sister could just be the factor that pushes her to blow the baby swap scam wide open and reunite Beth with the real mom.