BY Heather Hughes on March 9, 2019 | Comments: one comment
Related : Soap Opera, Spoiler, Television, The Bold and the Beautiful 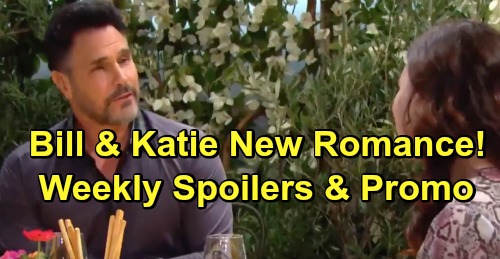 The Bold and the Beautiful (B&B) spoilers preview for the week of March 11-15 tease that Katie Logan (Heather Tom) will try to fight her feelings for Bill Spencer (Don Diamont). Donna Logan (Jennifer Gareis) is working with Justin Barber (Aaron D. Spears) on a matchmaking plot, so she’ll keep up the good work in the coming episodes. She’ll try to convince Katie that she’s falling for Bill again.

Katie will argue that she’s already been married to Bill twice. She’ll think there’s a reason that things haven’t worked out, but Donna will contend that third time’s the charm. B&B fans know that Bill has taken steps to improve his life and turn from his wicked ways. Donna will point that out to Katie and suggest that sometimes people really can change.

Katie won’t want to rock the boat for Will Spencer (Finnegan George) in any way. Part of her will feel like they’re all in a good place right now, so why risk messing that up? However, Donna won’t stop playing Cupid and neither will Justin. In fact, they’ll recruit two new team members for their matchmaking mission.

The Bold and the Beautiful spoilers say Wyatt Spencer (Darin Brooks) and Sally Spectra (Courtney Hope) will sign on to help. It may be a bit weird for Wyatt considering he’s also Katie’s ex, but he’s happy with Sally now. If Bill and Katie can find happiness together as well, Wyatt will be all for it.

Later, Katie and Bill will fall into a romantic trap. They’ll end up in the right place at the right time thanks to all the schemers pushing them together. The Bold and the Beautiful spoilers say the former flames will bond at Il Giardino. Bill and Katie will figure out what’s going on, so they’ll decide to go ahead and tackle the issue. Should they get back together or stick with friendship and co-parenting?

Katie and Bill will determine that they should just see how this goes. They won’t force anything, but they won’t intentionally hinder it either. They’ll just want to see where life might take them next, which sounds like a good plan.

During a fierce with Reese, Flo will make herself crystal clear. B&B’s weekly promo video shows Flo shouting, “Hope is going to know that her baby is still alive, and there is NOTHING that you can do to stop me!” Reese will look horrified by Flo’s intentions, but we all know she won’t actually blab!

Steffy Forrester (Jacqueline MacInnes Wood) is taking the girls to Paris this week, so this storyline will be put on hold for a while. They can’t do a big reveal without Steffy around. Still, Flo will be real wildcard in the coming episodes. She could easily spill too many clues and cause major trouble.