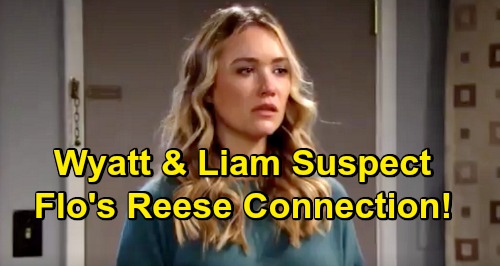 The Bold and the Beautiful (B&B) spoilers tease that Wyatt Spencer (Darin Brooks) will have mixed feelings about Florence “Flo” Fulton (Katrina Bowden) reentering his life. Since Flo was his old high school sweetheart, reconnecting has stirred up some things for him. Wyatt has fallen head over heels for Sally Spectra (Courtney Hope), so it’s strange for him to suddenly feel pulled in another direction.

Of course, Wyatt will remain firmly committed to Sally for now. It’s not like he’s instantly falling in love with Flo again, but there’s still something between them. However, Flo’s latest lie has made all this even more complicated. She told Wyatt she didn’t have children, so he was thrown for a loop to learn she’s “Phoebe Forrester’s” (Isabella de Armas and Redford Prindiville) “birth mom.”

The Bold and the Beautiful spoilers say Flo will continue to behave suspiciously, so Wyatt won’t know what to think. That’s especially true since Liam Spencer’s (Scott Clifton) concerns about Flo will grow stronger. Her connection to Wyatt has created drama she never expected when she signed on for this scheme.

Flo agreed to help Dr. Reese Buckingham (Wayne Brady) with his illegal adoption scam, but she had no idea Wyatt would be involved. He’s got a complex history with both Hope and Steffy Forrester (Jacqueline MacInnes Wood). Wyatt also happens to be the brother of Beth Spencer’s father, so Flo’s in deep trouble.

The fact that Wyatt’s mixed up in this is a coincidence, but how can it possibly look that way? As Liam continues to mull over Flo’s behavior and past with Wyatt, he’ll become even more concerned. Flo can’t be trusted, so Liam will wonder what else she’s hiding. His mind may also wander back to Flo’s connection to Zoe Buckingham (Kiara Barnes). There are just be too many weird links here.

Since Steffy will be leaving for Paris with the girls soon, Liam will have more time on his hands. He may use it to look into Flo’s background a bit. As for Wyatt, he’ll want to believe Flo is the same wonderful woman he once loved, but he may buy into Liam’s growing fears. B&B fans may see a real internal struggle as Wyatt fights both his feelings and his doubts.